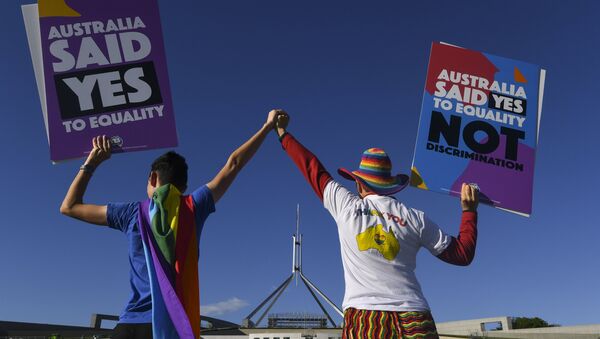 The first gay marriage is supposed to be registered in February 2018.

On Thursday, the House of Representatives of the Australian Parliament supported the bill on the legalization of same-sex marriage. In the Senate, voting on this bill took place a week earlier. They also approved the bill.

Fewer than five of 150 MPs voted against the law same-sex marriage.

"What a day. What a day for love, for equality, for respect," said Australian Prime Minister Malcolm Turnbull. "…It is time for more marriages."

Yes! The bill has been passed and same-sex marriage is now OFFICIALLY legal in Australia. I’m so happy for my family and friends of the LGBT community right now. We did it! We bloody it! ❤️ #MarriageEquality

​Australian Attorney General George Brandis said that it may take about a month before same-sex couples can formally consolidate their union.

"Love has won, and it's time to pop the bubbly," Greens MP and same-sex marriage supporter Adam Bandt said.

​Members of the LGBT community fought for the equality of marriage in Australia for decades.