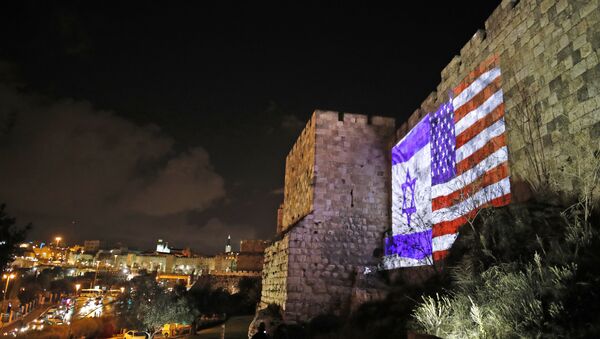 © AFP 2021 / Ahmad GHARABLI
Subscribe
On Wednesday, Trump has recognized Jerusalem as Israel's capital and ordered the US State Department to start the process of moving the embassy to the ancient city from Tel Aviv.

TEL AVIV (Sputnik) — The authorities of Jerusalem have decided to lit up the old city's walls with colors of flags of the United States and Israel, welcoming a decision by US President Donald Trump to recognize Jerusalem as the Israeli capital, the city mayor's office said in a statement.

"As a gesture of gratitude for the courageous friendship between American and Israeli peoples we decided to light in the colors of the flags of the two countries the walls of Jerusalem's old city — the symbol of the Jewish people's strong connection to Jerusalem for 3,000 years," Mayor of Jerusalem Nir Barkat said Wednesday as quoted in the statement.

Jerusalem's city hall has also decided to fly US flags along Agron, Shazar and Ruppin streets in the city's center, according to the statement.

This is in the CENTER of the city, “French Square” right near @netanyahu’s resident and @USCGJerusalem — Jerusalem municipality put up US and Israeli flags on the light posts. This is reserved for special occasions and holidays 🇺🇸 🇮🇱 pic.twitter.com/lgn1MgvB5X

Following Trump's announcement, Israeli Prime Minister Benjamin Netanyahu urged all countries to follow the US example by recognizing Jerusalem as the capital of Israel.

000000
Popular comments
Lets wait an see witch country or country's like to get a "OSCAR" for to be the best Lap Dog from the Usa ???