US President Donald Trump's decision to recognize Jerusalem as the capital of Israel will open the door to a new Middle Eastern crisis, Basem Al-Aga, Palestinian ambassador to the Kingdom of Saudi Arabia (KSA), told Sputnik. The ambassador warned about the implications of the move for the Palestinian-Israeli conflict and the world in general.

The transfer of the US embassy to Jerusalem will mean the recognition of Israel's occupation and the erasure of all efforts to achieve peace in the region, Basem Al-Aga, Palestinian ambassador to the Kingdom of Saudi Arabia (KSA), told Sputnik Arabic.

"This is what the great power, which should protect international law, is doing," al-Aga said, adding that the recognition of Jerusalem as Israel's capital by the Trump administration "will deal a blow to international law and the resolutions already adopted on this issue."

He stressed that "great powers must respect the earlier decisions and execute them."

Trump May Need to Build a 'Fortress' to Protect Staff in New Jerusalem Embassy
It was reported that US President Donald Trump is due to recognize Jerusalem as the capital of Israel on December 6. He is expected to order the US State Department to move the US Embassy from Tel Aviv to Jerusalem.

The Palestinian ambassador underscored that the position of Palestine and the entire Arab world on the matter is well known. "Everyone is warning [the US] about the potentially dangerous consequences of this decision," he noted.

"Let me tell you one case," al-Aga continued. "When King Salman bin Abdul Aziz was the emir of Riyadh, he attended the opening ceremony of the Saudi Embassy in Algeria. There, in the presence of the ambassadors of Arab countries, he said the words which I now repeat: The Palestinian question concerns not only the Palestinian people, but all Arabs and all Muslims. The American leadership must understand that any action towards Palestine cannot be unilateral." 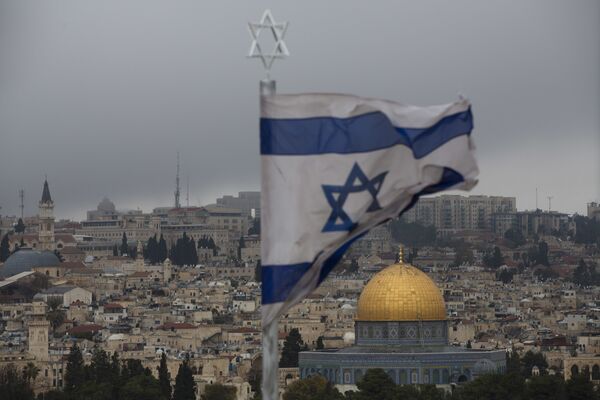 Commenting on the Palestinians' response to Washington's move, the ambassador suggested that Mahmoud Abbas, the President of the Palestinian National Authority would hold an emergency meeting to discuss the crisis with the other Arab leaders. It would be followed by the summit of the leaders of Islamic countries. "That's where we start," al-Aga noted.

He neither confirmed nor rejected the possibility of the new Palestinian Intifada, stressing that "the people of Palestine are living in hope that the international law will prevail."

According to al-Aga, the US actions de facto protect Israel's occupation and the construction of new settlements on the territories seized from the Palestinians.

"If there is no peace in Jerusalem, then it will be none in the whole world," the ambassador said. "With all confidence, I would say that [Trump's] decision will affect the stability not only of Palestine, but of the region and the world."

Trump Crosses Red Line on Jerusalem
When asked whether the Palestinians may counterbalance the US move, al-Aga responded: "We can kick off advances in all possible directions, so that the US understands that they cannot act so unfairly. We have international law and the Arab peace initiative at our disposal. But this is not enough."

Being a Palestinian Ambassador to the KSA, al-Aga shed light on Riyadh's stance on the matter, citing the statements of the Saudi Council of Ministers, the Foreign Ministry and the Saudi ambassador to the United States, Khaled bin Salman. He stressed that the American decision undermines all efforts of the KSA and Egypt for a peaceful settlement.

The ambassador referred to the Tuesday phone conversation between President Putin and the Palestinian leader: "In my opinion, it was a sign of solidarity and support. President Vladimir Putin recognizes the necessity to resolve the conflict between the two countries, and [supports] international law and the efforts of M. Abbas."

World
Pope Francis on Jerusalem: 'I Pray to God That Prudence Prevails'
Jerusalem is claimed by both the Israelis and Palestinians as their capital.

The UN decision of November 1947, which is known as the Partition Plan for Palestine (Resolution 181) envisaged the partition of Palestine into Arab and Jewish states, with Jerusalem being established as a "separated body" with a special legal and political status, administered by the UN.

The United Nations Security Council has repeatedly condemned Israel's attempted annexation of East Jerusalem. However, in response to the repeated pleas from its ally the US issued the Jerusalem Embassy Act of 1995 which envisaged the relocation of the Embassy of the United States in Israel from Tel Aviv to Jerusalem, no later than May 31, 1999, which would open the door to Jerusalem's recognition.

On April 6, 2017, the Russian Foreign Ministry announced that it reaffirms the Russian Federation's "commitment to the UN-approved principles for a Palestinian-Israeli settlement, which include the status of East Jerusalem as the capital of the future Palestinian state."

"At the same time, we must state that in this context we view West Jerusalem as the capital of Israel," the Foreign Ministry statement issued on the Palestinian-Israeli settlement said.