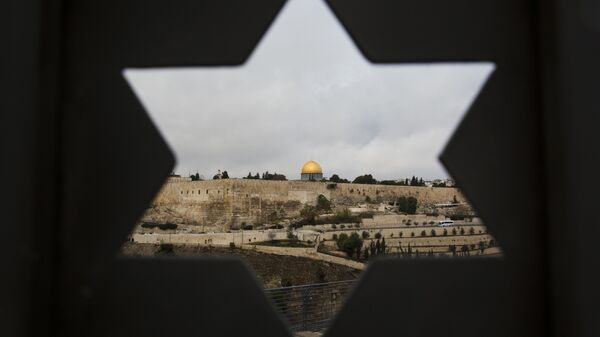 © AP Photo / Oded Balilty
Subscribe
International
India
Africa
The US president has stated that Israel has the right to determine its own capital and the decision is a long overdue step to advance the peace process between the Jewish State and Palestine.

"I have determined that it is time to officially recognize Jerusalem as the capital of Israel," Donald Trump said on Wednesday. "It is the right thing to do so."

He has announced he ordered the Department of State to take measures for the relocation of the embassy from Tel Aviv to Jerusalem. However, Trump has said he signed a waiver delaying the Embassy relocation for six months.

The president reiterated Washington's commitment to the two-state solution of the Israel-Palestine issue and vowed to do "everything" in his power to facilitate reconciliation between them. He described the decision as "a historic day" and "an important step toward peace".

Last week, US officials revealed President Trump's intention to declare formal recognition of Jerusalem as the capital of Israel and initiate the process of relocating the US embassy from Tel Aviv, thus overturning decades of US policy.

Objections to the move from across the Arab world failed to deter the president from making Wednesday's announcement, which fulfils a campaign promise Trump made.

A spokesman for Palestinian leader Mahmoud Abbas warned that moving the US embassy to Jerusalem would threaten the peace process in the region.

"Any American step related to the recognition of Jerusalem as capital of Israel, or moving the U.S. Embassy to Jerusalem, represents a threat to the future of the peace process and is unacceptable for the Palestinians, Arabs and internationally," Abbas told a group of Arab lawmakers from Israel, the Wafa news agency reported.

President Trump forewarned several regional leaders, including Egyptian President Abdel Fatah al-Sisi, who reportedly told Trump there was no need to "complicate" matters in the Middle East and warned him against "taking measures that would undermine the chances of peace in the Middle East."

According to the Saudi Press Agency, King Salman told the US president, "Such a dangerous step is likely to inflame the passions of Muslims around the world due to the great status of Jerusalem and the al-Aqsa Mosque."

King Abdullah of Jordan stated that moving the US embassy to Jerusalem would have "dangerous repercussions on the stability and security of the region."

At a joint news conference with King Abdullah last Wednesday, Turkish President Recep Tayyip Erdogan said the move "will only play into the hands of terror groups." Erdogan has also called for the Organization of Islamic Cooperation to meet in Istanbul on December 13 to discuss the status of Jerusalem.

US embassies in the Middle East increased security with teams of US Marines ahead of Wednesday's announcement, in expectation of unrest. The Israeli Defense Force began preparing for riots in the West Bank, the Gaza Strip and East Jerusalem, after Hamas announced it plans to hold a "day of rage" in aftermath of the announcement.

READ MORE: Social Media Erupts at US Move of Embassy to Jerusalem

In a sign that Trump was planning to change the US policy, on Monday he did not sign a national security waiver traditionally signed by US presidents every six months, which keeps the US embassy in Tel Aviv.

Both Israel and Palestine claim Jerusalem as their capital. The Israeli parliament sits in West Jerusalem, which Israel established as its capital in 1950, in spite of a 1947 UN plan for a special international regime for the city. Since 1967, Israel has also occupied East Jerusalem and claims the city as its undivided capital.