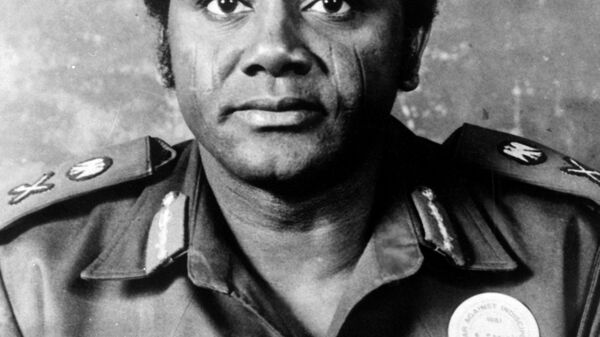 © AP Photo / AP Photo
Subscribe
This week, the Swiss and Nigerian governments came to an agreement that Switzerland would repay Nigeria $321 million in public funds stolen by Nigeria’s former leader Sani Abacha, who was the de facto president from 1993 until his death in 1998, and stashed in Switzerland.

The stolen money, which was originally deposited in Luxembourg but at some point transferred to Swiss bank accounts, was confiscated and frozen by a Swiss court in 2014 during a criminal investigation of Abacha's son, Mohammed. In March 2016, Switzerland and Nigeria signed an agreement to redirect the stolen money back to Nigerians.

"In accordance with policy on repayment of national assets taken illegally, Switzerland has agreed with Nigeria and the World Bank to return nearly $321 million for the benefit of the Nigerian people," the Swiss government said in a recent statement.

"The restitution of funds will take place within the framework of a project supported and overseen by the World Bank," the Swiss statement said. The funds will be repaid to the Nigerian government under the supervision of the World Bank, which will perform frequent audits to ensure that the money is not stolen again.

"We looked at a way to restitute the money in order that the money can profit the population of Nigeria," head of international law at the Swiss Federal Department of Foreign Affairs Roberto Balzaretti told Radio France Internationale.

"It is the first time we are having this sort of trilateral agreement and we feel confident that it will work. Plus we signed it in the spirit of trust that the money will be put to good use," he added.

Switzerland has already returned approximately $700 million stolen by Abacha to Nigeria after the country issued multiple appeals. The $321 million transfer is the last installment of the "Abacha loot" in Switzerland.

"We don't have any assets of the former [Nigerian] president or entourage or family in Switzerland. We've restituted all we had been able to freeze and confiscate," Balzaretti added.

Several Nigerian administrations have tried to retrieve money stolen by Abacha. However, Nigeria's current president, Muhammadu Buhari, is the first to be successful, having vowed to recover what he called "mind-boggling sums of money stolen over decades" when he took office in 2015.

"We are grateful for the international support we're getting in the fight against corruption. Global collaboration is critical to the success of the fight… We will continue to work to deepen mechanisms not just for asset recovery but for preventing corruption in the first place," the Buhari administration said in a recent statement.

When the agreement was announced this week, Swiss Foreign Minister Didier Burkhalter said that fighting corruption is "one of Switzerland's priorities."

"The project will strengthen social security for the poorest sections of the Nigerian population. The agreement also regulates the disbursement of restituted funds in tranches and sets out concrete measures to be taken in the event of misuse or corruption," the Swiss government said this week.