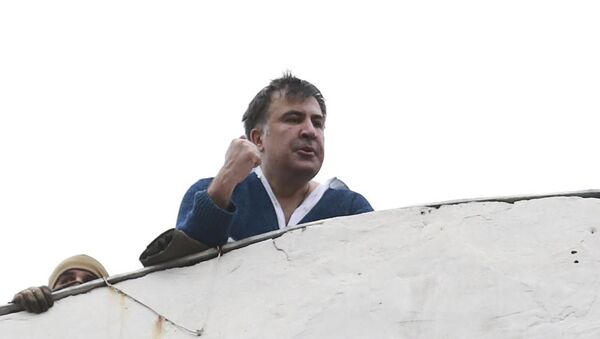 Disgraced Georgian ex-president-turned Ukrainian politician Mikheil Saakashvili is in the news again, this time for climbing on a roof of a residential building in Kiev and threatening to jump off. Let Sputnik provide a brief refresher on the politician's biography, and a few of the 'greatest hits' from the many scandals of his political career.

Ukrainian prosecutors have opened a criminal case against Saakashvili, charging him with conspiracy, planning to commit a crime, assistance to criminal organizations and the concealment of their criminal activities. Ukraine's security services raided a tent camp near the parliament building early Wednesday morning in an unsuccessful effort to try to find the politician, who had escaped custody and joined a crowd of protesters Tuesday after a dramatic standoff with the security services on the roof of his apartment building. After being rescued from security agents by supporters, Saakashvili went to the parliament, where he and protesters vowed to stay until the current government resigns.

A fugitive in his native Georgia, where he is wanted on corruption and abuse of power charges from his tenure as president between 2004 and 2013, Saakashvili turned into a major headache for the Ukrainian government shortly after arriving in the country in 2015. Invited in by his friend President Petro Poroshenko, who appointed him governor of the Odessa Region and granted him honorary Ukrainian citizenship, the veteran color revolutionary started making waves almost immediately by accusing Kiev and Poroshenko personally of enabling and engaging in corruption. In July, while on a trip to the US, he was stripped of his Ukrainian citizenship, but managed to slip into Ukraine illegally in September. After that, he began a campaign to rally support to impeach the Ukrainian government.

Saakashvili's career goes back a long way, and the list of his epic bloopers is almost as long. Arguably the most memorable among them took place in 2008, when the Russian military unexpectedly intervened to stop Georgian aggression against the breakaway regions of North Ossetia and Abkhazia after the deaths of Russian peacekeepers. During an interview with BBC, Saakashvili was shown chewing on his own necktie, apparently on the brink of a nervous breakdown. Days later, CNN captured the politician running in fear after hearing what he thought was a Russian warplane flying overhead.

Needless to say, the pair of incidents made him the butt of many jokes, and even came back to haunt him during his career in Odessa, when locals started a campaign to eject him from his post as governor.

In 2015, shortly after beginning his career in Ukraine, Saakashvili got into a humorous and much-publicized battle with Ukrainian Minister of Internal Affairs Arsen Avakov, accusing him of corruption during a cabinet meeting as the latter made fun of his Georgian accent. Avakov ended the argument by throwing a glass of water at the Georgian politician, as President Poroshenko looked on in dismay.

The demarche, and particularly Avakov's claim that Saakashvili spoke in a 'be-be-be' style, immediately led to the creation of dozens of epic rap remixes by online freestylers.

As expected, Saakashvili's shenanigans on the Kiev rooftops have breathed new life into his career as a political entertainer online, with social media quickly dubbing him 'Mikho-on-the-Roof', after popular Swedish character-turned-Soviet children's cartoon Karlsson-on-the-Roof.

Users had a field day transforming the politician into Karlsson.

"#Saakashvili who lives on the roof."

"Mikho who lives on the roof." [The jar, reserved for jam in the children's cartoon version, reads 'Elections', with President Poroshenko taking on the role of the story's cruel babysitter].

"Saakashvili who lives on the roof! Just last week Georgia legalized the use of light drugs. Find 10 differences…#Karlson in Kiev."

Other users, recalling the politician's earlier blooper moments, tied those into the latest incident.

"Even if Mishko #Saakashvili were not removed from the roof, he wouldn't die of hunger up there; he always has a tie handy."

"New stages, new genres, new performance numbers. What an interesting life this guy has! #Saakashvili remains one heck of an actor. I wonder how long it will be before this foundling once again starts eating his tie?"