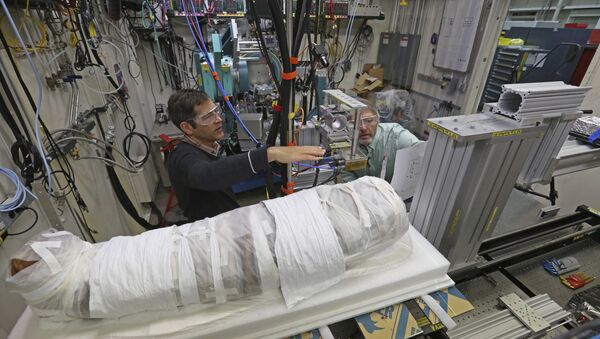 © AP Photo / Teresa Crawford
Subscribe
The new method is set to significantly enhance existing archeological research techniques, as it allows the researchers to carry out extensive tests without the risk of physically damaging the artifacts.

According to the BBC, a high intensity synchrotron X-ray will be used for the first time this Wednesday to produce a highly accurate 3D analysis of the ancient Egyptian mummy without unwrapping the body from her linen bindings.

The mummy, whose body has been preserved for over 1,900 years, is also very rare, as it combines the Egyptian process of mummification with the ancient Roman tradition of portraying the dead.

There are only 100 such "portrait mummies" in the world.

This one is even more special, as the body belonged to a five-year-old girl, who occupied a very high place in the ancient Egyptian social ladder, as evidence by the portrait and the "relatively lavish burial."

Archaeologists Discover Egyptian Mummy With Golden Burial Mask (PHOTOS)
The mummy, which was uncovered in 1911 by Sir William Flinders Petrie in Hawara, a major Egyptian archeological site, was put on display at the Garrett-Evangelical Theological Seminary, which is associated with Northwestern University in Chicago,

However, in order to study the uniquely preserved bone structure as well as analyze the insides of the mummy without unwrapping her bindings, it was recently transferred to the Argonne National Laboratory, a cutting-edge research facility run by the University of Chicago for the US Department of Energy.

The Laboratory is equipped with a powerful synchrotron X-ray that will enable the researchers to examine the mummy at the nano-level, producing a 3D picture that promises to be more detailed than the result of any other existing forms of scanning.