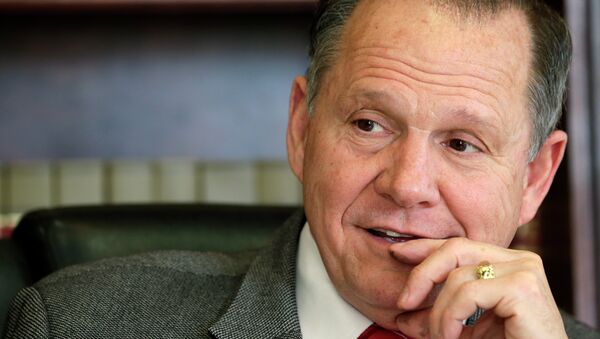 © AP Photo / Dave Martin
Subscribe
The Republican Party (GOP) had previously backed away from the controversial senatorial candidate, who was accused of sexual harassment by a number of women.

Just three weeks after distancing itself from Roy Moore, the candidate in the upcoming race for a seat in the US Senate, the Republican National Committee (RNC) has reportedly reversed its stance, resuming the flow of financial support to Moore's campaign.

The change of heart comes after President Donald Trump voiced his support for the embattled candidate, who has been caught in a sexual assault row.

On Monday, the US President tweeted his support for Moore before calling the former judge and urging him:  "Go get 'em, Roy."

"Democrats refusal to give even one vote for massive tax cuts is why we need Republican Roy Moore to win in Alabama," the tweet read.

A senior RNC official told Breitbart News that the Party will "stand with the President" in supporting the Alabama judge.

What Does the Roy Moore Controversy Say About Our Politics and Society?
Following the appointment of Jeff Session as the US Attorney General, the US Senate seat from Alabama remained vacant.

Moore, who served as the Chief Justice of the Alabama Supreme Court, has become the GOP's top pick for the race after beating Luther Strange in the primaries.

However, Moore has been entangled in a sexual harassment scandal when two women came forward, alleging that the former judge sexually harassed them.

Leigh Corfman told the Washington Post that Moore forced her to perform sexual acts when she was just 14 years old, whilst Beverly Nelson claimed that the GOP candidate forcefully touched her breasts in a car.

A number of other women revealed that they had relationships with Moore during their teenage years, despite the significant age difference with the judge.

Roy Moore 'Should Step Aside' Amid Sex Allegations - Speaker Ryan
These allegations forced Speaker of the House Paul Ryan, to call upon the candidate to "step aside" if he "cares about the values and the people who he claims to care about."

Similarly, when asked about the allegations against Moore, Senate Majority Leader Mitch McConnell said that he "believes the women."

Moore dismisses these claims as a plot to undermine his campaign by the liberal establishment.

Twitter did not take kindly to the RNC's decision.

It’s bad enough that the RNC is back to giving money to Roy Moore, but I find their new ad trying to normalize his child molesting appalling! pic.twitter.com/WBIZcwzlKd

RNC NEW SLOGAN: We protect the fetus, not the vulnerable teenage girl. #RoyMoore

The RNC just proved once again by taking Roy Moore back

That they are the party of Child Rapists, along with Political Collusion with Foreign Governments, Nazis, Off Shore Banking, Big Oil, and most importantly Greed.#Morningjoe #TuesdayThoughts #DeutscheBank

#MorningJoe The RNC continues its descent into hell with their support of #RoyMoore the child whisperer. GOP has been finally exposed for the amoral, greedy backyards they've always been.

There was nothing more inevitable than the RNC restoring support for Roy Moore. Again, the party’s official platform is forced childbirth for teenage girls. They do not see girls or women as people.

Every Republican has to decide if they can stay with the GOP after the RNC & Trump have endorsed a man as vile as Roy Moore. #TuesdayThoughts

the RNC decision to re-endorse Roy Moore tells you pretty much everything you need to know about Republicans in 2017.

000000
Popular comments
The Republican Party along with the Democratic party both faught to derail Trump, yet today the party wants money from his base in his support ? There is something terribly wrong with this picture.. Sorry fellows I do not support your agendas, kiss off.