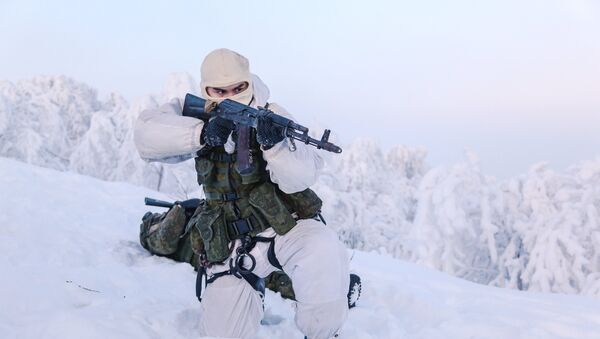 A contradictory new report on Russia by the Norwegian Defense Ministry's research institute has triggered polarizing reactions, entering an ongoing debate on whether Russia is a friend or a foe. Oslo's current take was challenged by researchers from the Nordic country's foreign policy institute.

The Norwegian Defense Research Institute (FFI) came up with a conflicting report which listed reasons why Russia has allegedly become more dangerous for Norway and two reasons why it hasn't, which has only added more fuel to the fire of the perennial debate on the "Russian threat."

Apart from Crimea's re-unification with Russia and the conflict in Ukraine (of which Russia is not part), which in Norway are both portrayed as tokens of aggression on Moscow's part, the FFI stressed the fact that Russia launched a comprehensive military reform in 2008, with professional soldiers outnumbering draftees for the first time in 2014.

At Ease, Ladies! Norway Discovers Women Undermine Army's Fighting Ability
Another thing that caught the FFI's attention is Russia's increased defense expenditure over the past decade, as it has invested heavily in new aircraft, submarine and missiles in sweeping upgrades. Moscow also put a greater emphasis on large-scale drills stretching over longer periods of time. Consequently, Russia's anti-terrorism campaign in Syria was seen as "showing muscle abroad" and "testing Western tolerance."

"Seen from Scandinavia and NATO's east European members' perspective, Russia still has military superiority in the region, but it hardly wants to land in a conflict with the world's strongest military alliance that is NATO," FFI researcher Kristian Åtland told the Aftenposten daily.

The FFI itself admitted that NATO's European members alone collectively spend five times more than Russia, despite US President Donald Trump's repeated calls to step up defense expenditure. Furthermore, the Barents region or the Arctic could not be compared to Ukraine or the Black Sea region as far more stable. Lastly, neither the Soviet Union nor Russia has been in conflict with Norway, despite sharing borders for hundreds of years.

Julie Wilhelmsen, senior researcher at the Norwegian Institute of International Affairs (NUPI), argued that Oslo's current defense policy has put Norway on the wrong track, which she described as "preoccupation with trying to discourage and deter Russia," questioning the idea that it gives Norway "the greatest amount of security."

Wilhelmsen expressed criticism of both Norway's extensive military build-up including the acquisition of US F-35 fighter jets and the much-debated decision to invite US marines on a rotation, which Russia views as a provocation, coupled with NATO's establishment of outposts along borders in the Baltic and Eastern Europe.

​According to Wilhemlsen, relations between Russia and the West in general are rather gloomy at present, as both sides are engaged in a spiral of escalating tensions, increasingly viewing each other as rivals or even enemies and relying on programs likely to be perceived as offensive by the counterpart. Wilhelmsen stressed that counting bombs and canons and increasing their numbers will be of no help unless Western allies including Norway and NATO try and see how Russia sees itself, its role in the world and not least its neighboring areas.

​Meanwhile, Norway's new Defense Minister Frank Bakke-Jensen is hailing from Finnmark in northernmost Norway, which shares a 90-kilometer land border with Murmansk Region and historically enjoyed neighborly cooperation regardless of the political circumstances. Northerners' attitudes towards Russia are still influenced by the fact that the Soviet Union helped liberate polar Norway from Nazi Germany during WW2. Another trait that singles him out is that he actually has a military background, unlike several of his predecessors.

"I'm from Finnmark and I'm used to having a dynamic relation with Russia," Bakke-Jensen told the Dagsavisen daily. "Even though the defense policy cooperation isn't there any longer, we have continued to have a good people-to-people cooperation. That's firm," he added.

Bakke-Jensen stressed that the US Marine Corps was only invited as part of the training routine and that the US has no permanently stationed troops in Norway, despite Russia's objections.

"We listen to what Russia says, but we think they're wrong," Bakke-Jensen said, reiterating Oslo's line.

What are you doing to get better today? Marines in Norway compete to improve! #WOOOOOO 🇳🇴🇺🇸 pic.twitter.com/UCbJRosYb9