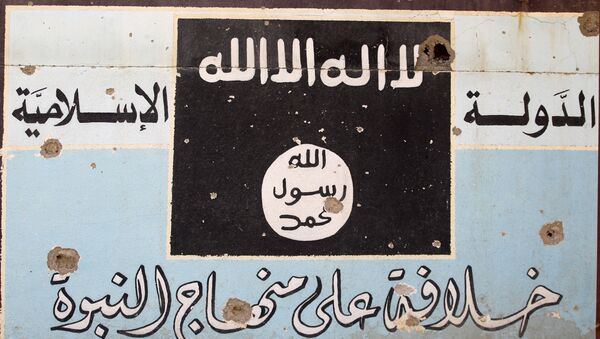 Loretta Napoleoni is a bestselling author, and authority on terrorist financing. She advises several governments and international organizations on counter-terrorism and combating financing of extremist networks. Her most recent work is Merchants of Men, a book documenting how post-9/11 Western foreign policy is responsible for an explosion in kidnapping and people trafficking.

Sputnik: What did you make of the exposure?

Loretta Napoleoni: I'm not surprised at all. These things happen all the time. It's impossible to control how such money's distributed once it gets to its destination — especially in a country like Syria. The United Nations very openly acknowledges a vast percentage of the aid it distributes — as much as 35 percent — ends up in the coffers of armed organizations. No country can send aid with 100 percent certainty none of it will be misused.

Still, for the average Western citizen, this is probably shocking — they assume the government is funding the good guys, but the truth is there are no good guys to fund. If an armed organization pledges to fight Daesh, this does not automatically make them a legitimate army. These are all outlaw groups.

Loretta Napoleoni: The West is fighting wars by proxy. The alternative is you get your own people involved, which no one wants. The trade-off is you don't control how money is spent — and once it's distributed, you have no idea who'll use it, because you're not on the ground yourself.

In the case of the anti-Soviet jihad in Afghanistan in the 1980s, the entire system of funding was delegated to the Pakistani secret service. In Syria, there's no centralization like that — money just gets poured into any group governments form a connection with. As a result, the phenomenon reported by Panorama is likely to be more frequent.

Of course, Pakistan's secret service enriched themselves along the way, stealing a massive amount of money — but at the end of the day, it was a single centralized body. In Syria, we have absolutely no idea where money given to the Kurds has gone, for instance.

'I think it's very interesting that an armed jihadist group produced such a sophisticated model'
— @l_napoleoni on how ISIS is funded. pic.twitter.com/cZCUV5AI02

Sputnik: How do you rate media coverage of the Syrian crisis?

“The price of a mistake is death.” A veteran reminiscences about the Soviet-Afghan war.

Loretta Napoleoni: The coverage has been very poor, largely because media organizations don't have people on the ground there. The situation is complex and they lack access to decent inside information — although even people in Syria are unsure about what's really happening.

I don't think we've ever been in a situation like this, historically speaking — getting reporters into the country is almost impossible, so outlets rely on people who live locally who may not be telling the truth, whether that's via the conscious spread of propaganda, or simply relaying incorrect information they've heard.

For instance, Daesh's leadership has, technically speaking, disappeared from Syria — but they could in fact be hiding in the tribal, Bedouin-dominated regions of the country, regrouping and preparing for their return. Of course, you don't read that in media, because there's no definitive proof of that.

Sputnik: Do you think Daesh will return to Syria?

Loretta Napoleoni: Not at the moment — Russia remains involved, and the Assad government has reconquered the territory it's lost, but it doesn't mean everything that happened before won't happen again. This money could, one way or another, finance the next insurrection — the return of the caliphate. It's quite upsetting.

000000
Popular comments
Misdirected? There is not such a thing when US's/UK's/French/Germany's secret services (ab)use their funds. I am afraid Lorette Napoleoni is just spending her politeness on wrong kind of humans, both on sending and receiving side of those mentioned funds (if we can be polite enough and call them humans)...
oldman
5 December 2017, 18:19 GMT3
000000
Misdirected funds hahahah Just another case of the right hand not knowing what the left one is doing i gues lol :D