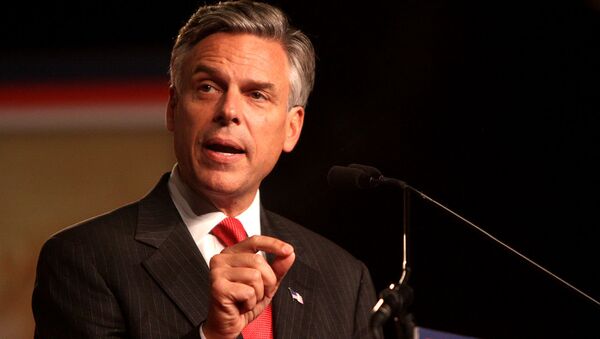 The US Ambassador to Russia has commented on the current state of diplomatic relation between the two countries and explained his main goals as ambassador.

MOSCOW (Sputnik) — US Ambassador to Russia Jon Huntsman said in an interview to the newspaper Vedomosti that he considers rebuilding trust between Washington and Moscow, which would make productive cooperation possible, his main goal.

The level of trust in Russian-US relationship is extremely low at the moment, Huntsman told the newspaper in an interview, published on Monday.

US Congressmen Reject Russian Ambassador's Meetings Requests
The ambassador said that the alleged Russian interference in the US 2016 presidential election played an important role in the deterioration of the relationship. Huntsman also said that he believes that Russia's response to its diplomats being expelled from the United States was not fairly matched.

In late July, Moscow decided to reduce US diplomatic personnel in Russia in response to Washington's expulsion of Russian diplomats and the closure of diplomatic compounds at the end of 2016. The US diplomatic mission was brought down to 455 people, which is the same number as that of the Russian diplomatic personnel in the United States. Later, the United States shut down Russia's consulate general in San Francisco and trade missions in New York City and in Washington, DC.

However, ambassador Huntsman noted that the joint statement by Vladimir Putin and Donald Trump, made in Vietnam, on Moscow and Washington's determination to fight against terrorism was extremely important.

Russian Envoy to US Visits Seized Property in San Francisco
The two presidents made great progress at their meeting in Vietnam's Da Nang, the ambassador said in an interview. Huntsman added that he considered the content of talks more important than their length, and the meeting between Putin and Trump in Da Nang was important in terms of content.

The joint statement of Putin and Trump was issued on November 11, following their meeting on the sidelines of the APEC conference in Vietnam. The two presidents confirmed their commitment to defeating the Daesh terrorist group in Syria and also agreed on the inadmissibility of a military solution for Syria, gripped by the conflict between the government and the opposition, exacerbated by the presence of terrorist groups in the country.