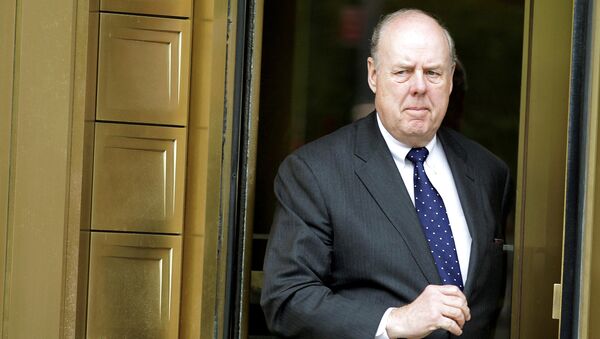 © REUTERS / Brendan McDermid/File Phot
Subscribe
An attorney for US President Donald Trump has stepped in to take responsibility for a tweet posted on the president’s personal account that stated that he fired former National Security Adviser Michael Flynn for lying not only to VP Mike Pence but also to the FBI. Not everyone, however, was convinced by his move.

"I had to fire General Flynn because he lied to the Vice President and the FBI," Trump tweeted on Saturday. "He has pled guilty to those lies. It is a shame because his actions during the transition were lawful. There was nothing to hide!"

His statement could be interpreted as potential evidence of obstruction of justice. It indicated that Trump knew that Flynn could have committed a serious crime because "he lied to the FBI" and, according to former FBI Director, James Comey, the president asked Comey to stop investigating Flynn. On Sunday, the president again denied the claim, calling it a "lie" and saying he "never asked" Comey to halt an investigation into the former national security adviser.

Lying to the FBI is for sure against the law, bud. So, no.

​In an attempt to save the situation, Trump’s attorney John Dowd took the blame, stating he drafted the president’s Saturday tweet and made a "mistake" when he composed it.

"The mistake was I should have put the lying to the FBI in a separate line referencing his plea. Instead, I put it together and it made all you guys go crazy. A tweet is a shorthand," Dowd said in an interview with Reuters on Sunday.

Dowd clarified that said the first time Trump knew that Flynn lied to the FBI was when he was charged.

The attorney also said he will "take responsibility" and is sorry for misleading people.

"I’m out of the tweeting business," Dowd told NBC. "I did not mean to break news."

The White House has yet to comment on the issue.

His suggestion that he authored the tweet have raised concerns and faced skepticism, including from legal experts.

ATTENTION: If John Dowd has lied, is lying, or does lie about whether he authored a tweet in which Donald Trump admitted committing a crime, (a) he has himself committed a crime, and (b) he'd be disbarred from legal practice immediately. America needs an answer on this right now. pic.twitter.com/8hRUtK7CXR

"If John Dowd actually wrote that tweet he should be fired. That's stunning legal malpractice."

— @RepTedLieu tells me, adding that even if it was Dowd, by it appearing on the president's account, "you've just owned it. So it doesn't even absolve Donald Trump."

2/ Now, realizing how incriminating @POTUS tweet is, his atty John Dowd, has taken responsibility. I worked w Dowd at DOJ and am shocked he would go to such lengths to protect a client or be so careless. If true, Trump shld fire him. If untrue, Dowd shld be disbarred for lying.

Really John Dowd wrote that one Trump tweet?
Not the previous, say, 3 million.
Just happened to be the one that incriminated himself, beyond doubt, for obstruction.

​Many on social media simply did not believe the story.

So we are to believe that John Dowd, a former DOJ attorney, just tanked his career by drafting a tweet that admitted the President obstructed justice. Or that he is so incompetent that he didn’t realize what he was saying. Either option doesn’t make sense.

The lying is just soul & society destroying. Make it stop! The only way it will stop is if people like John Dowd pay a steep price for it.

I dare you to tell Mueller you logged into POTUS’s Twitter account and wrote “pled” and the rest of that, John Dowd. I dare you. https://t.co/gDBnISywGS

​Dowd joined Trump’s legal team in June 2017 amid an investigation by special counsel Robert Mueller into the Trump team’s alleged "collusion" with Russia, a clam repeatedly denied by the US president and Moscow.

As part on the ongoing investigation, Trump’s former National Security Adviser, Michael Flynn pleaded guilty on Friday to charges that he made false statements to the FBI about his contacts with then-Russian ambassador to the US Sergei Kislyak.

Flynn is the fourth member of the Trump campaign to face charges in the ongoing Russia probe, which has been called a "witch hunt" by President Donald Trump, with former campaign manager Paul Manafort, his business associate Rick Gates and former foreign policy adviser George Papadopolous having also been charged