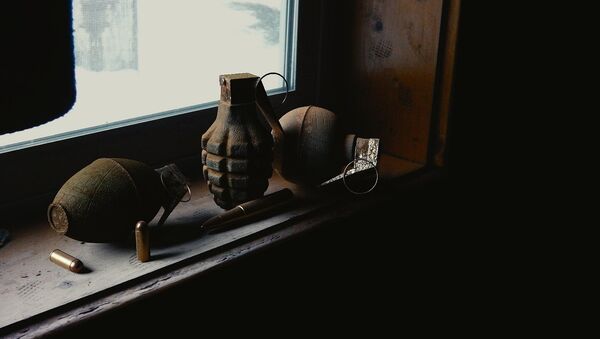 CC0 / /
Subscribe
Sweden, which saw a dramatic spike in incidents involving hand grenades in recent years, is hoping to purge its streets of this plague with a government amnesty, during which criminals will be offered a rare opportunity to hand in explosives without getting punished.

In a bid to get grenades off Swedish streets, the government is planning a three-month amnesty between October 2018 and January 2019. During this period, criminals will be encouraged to hand in hand grenades without being penalized.

The government sees the arms amnesty as a serious step towards combating serious crime. The hope is that the hardened criminals who deal with illegal weapons will take the bait and voluntarily hand over their grenades to the police.

"During previous weapons amnesties, some thousands of weapons had come in, but we have no experience of this kind [with grenades]. This is the first time," Justice Minister Morgan Johansson told the Dagens Nyheter daily.

Nearly Invisible Threat: 3D-Printed Arms Trigger Terrorist Concerns in Sweden
The number of hand grenade explosions is on the rise in Sweden, peaking at 27 in 2016. The total number of police cases dealing with the use of hand grenades has risen from eight in 2014 to 52 in 2016.

The possession of explosives was previously linked to criminal gangs, who are suspected to have gained increased access to an assortment of arms, which they later use against each other and the authorities.

The most recent example involves a hand grenade attack on a police station in the city of Uppsala, north of Stockholm. The blast was later reported to be either retribution or scare tactics specifically targeting the police. Although no one was injured, the police classed the incident as devastation endangering the public and attempted murder.

"There were lots of people around, both residents and police officers. It was pure coincidence that no one was injured," the local police head Carin Götblad said at a subsequent press conference.

In October, the Swedish government promised increased protection for the police following a series of targeted attacks against officers' homes and police stations with gunshots, fireworks and cobblestones. Several of the violent attacks are allegedly linked to criminal gangs.

Wild Wild North: Trigger-Happy Sweden Soon to Rival Mexico in Shootings
Sweden's police chief Dan Eliasson stressed the severity of deliberate attacks against law and order, pledging to "strongly fight back." The government, however, is cautiously hopeful that the addressees of the campaign will comply with the amnesty campaign.

Swedish PM Stefan Löfven announced earlier this year that he wanted the minimum penalty for carrying a hand grenade in the country to be quadrupled. If adopted, the bill, which is currently under scrutiny, will tighten the punishment for hand grenade possession to at least two years in prison.

An arms amnesty has been carried out on three occasions in Sweden (1993, 2007 and 2013) with the intention of reducing the number of illegal arms circulating in the society. In the latest instance alone, over 15,000 firearms and 36,000 tons of ammunition were collected.

000000
Popular comments
It is hilarious when brainless politicians come up with a plan like this. But, on the other hand, it gives the criminals an entry to the police stations to blow themselves up inside instead of only throw the grenades at the entrances. Sweden gets more and more pathetic with politicians like that.
Robert Klimenko
4 December 2017, 19:59 GMT
000000
Criminals? Only by the dhimmi Swedish are they referred to as such, never in their own religion though!
terryjohnodgers
5 December 2017, 01:27 GMT
000000
Newsfeed
0
New firstOld first
loader
LIVE
Заголовок открываемого материала
Access to the chat has been blocked for violating the rules . You will be able to participate again through:∞. If you do not agree with the blocking, please use the feedback form
The discussion is closed. You can participate in the discussion within 24 hours after the publication of the article.
To participate in the discussion
log in or register
loader
Chats
Заголовок открываемого материала
Worldwide
InternationalEnglishEnglishMundoEspañolSpanish
Europe
DeutschlandDeutschGermanFranceFrançaisFrenchΕλλάδαΕλληνικάGreekItaliaItalianoItalianČeská republikaČeštinaCzechPolskaPolskiPolishСрбиjаСрпскиSerbianLatvijaLatviešuLatvianLietuvaLietuviųLithuanianMoldovaMoldoveneascăMoldavianБеларусьБеларускiBelarusian
Transcaucasia
ԱրմենիաՀայերենArmenianАҧсныАҧсышәалаAbkhazХуссар ИрыстонИронауОssetianსაქართველოქართულიGeorgianAzərbaycanАzərbaycancaAzerbaijani
Middle East
Sputnik عربيArabicArabicTürkiyeTürkçeTurkishSputnik ایرانPersianPersianSputnik افغانستانDariDari
Central Asia
ҚазақстанҚазақ тіліKazakhКыргызстанКыргызчаKyrgyzOʻzbekistonЎзбекчаUzbekТоҷикистонТоҷикӣTajik
East & Southeast Asia
Việt NamTiếng ViệtVietnamese日本日本語Japanese中国中文Chinese
South America
BrasilPortuguêsPortuguese
NewsfeedBreaking
22:47 GMTMalaysia’s Transgender Tycoon Nur Sajat Granted Asylum in Australia From Blasphemy Charges
22:44 GMTBomb Threat Issued at Department of Labor in DC - Reports
22:36 GMTUS Indicts Congressman for Concealing Facts, Making False Statements
22:24 GMTUS Stocks Extend Rally as Third Quarter Earnings Sparkle, S&P 500 Near Record High
22:02 GMT‘We Really Need a Wake-Up Call,’ Rep. Gallagher Says on China’s Defense Advancements
21:47 GMTFBI Seen Taking Out Boxes From NYC House Allegedly Linked to Russian Billionaire Deripaska
21:22 GMTTed Cruz Says Biden's Cages for Migrants 'Bigger', 'More Full' Than Ever While No Democrat 'Cares'
20:56 GMTColin Powell, Moral Weakling
20:40 GMTAustralian Intelligence Chief Says Espionage Soon to Overtake Terrorism Threat
20:33 GMTSpain's Prado Museum Reeling From Unprecedented Protest by Victims of Mass Poisoning
20:16 GMTErdogan's UN Criticism Meant for Home Consumption But Others Will Listen
19:55 GMTSouthwest Drops Plan to Put Unvaccinated Staff on Unpaid Leave in December
19:44 GMTUS Homeland Security Chief Tests Positive for COVID-19
19:24 GMTTop Trump Security Adviser Contradicts ‘Imminent Attack’ Claim Behind Soleimani Assassination
19:19 GMTPoland's Prime Minister Accuses Germany, Nord Stream 2 of Driving Up European Gas Prices
19:15 GMTRepublican Kevin McCarthy Predicts More Democrats to Announce Retirement Fearing Fiasco at Midterms
18:56 GMTWhat's Behind Skyrocketing Number of US Military Suicides & Is US Gov't Doing Enough to Stop It?
18:52 GMTBeijing Demands US Provide Full Details of Nuclear Submarine Incident
18:49 GMTUK Plans to Create 'Persistent' Military Presence in Indo-Pacific Region
18:42 GMTSurveys in 46 Nations Show US International Image Improving Under Joe Biden