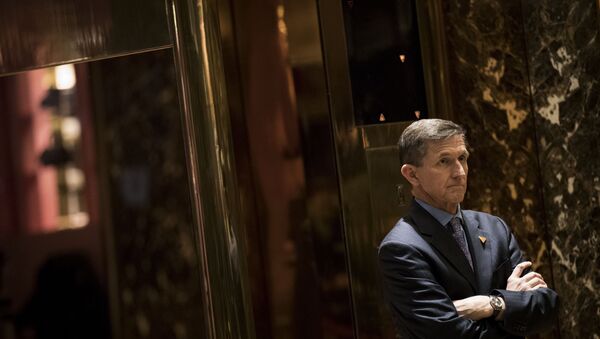 After former National Security Adviser Michael Flynn pleaded guilty to making false statements to the FBI, US President Donald Trump reiterated that there was no "collusion" between Flynn and Moscow. Radio Sputnik has discussed the matter with Daniel Franklin, an associate professor of political science at Georgia State University.

Daniel Franklin: There is possibly illegality associated with that. There is something called the Logan Act, which forbids private citizens from conducting foreign policy. There is nothing wrong with [Michael] Flynn's meeting with the Russians or anybody else for that matter from a foreign country, but if he begins to conduct foreign policy as a private citizen, which is what they were either during the campaign or during the transition, then they’re not supposed to do that; then it is illegal.

Sputnik: Now we know that it is not the first time the FBI has unsuccessfully tried to create a link between President [Donald] Trump's campaign and Moscow. It's obviously a consistent and constant campaign in terms of a Russia witch hunt. What's your take on the current situation? It doesn't seem to be going away, does it?

Daniel Franklin: It's an ongoing investigation – it's not an unsuccessful investigation, it's an ongoing investigation – and the FBI is run by the attorney general, the attorney general is hired by the president. If it’s a witch hunt I don't know where it is coming from, because the law enforcement, the federal law enforcement, is under the control of the president. […] When the administration has to investigate itself we appoint a special counsel. A special counsel is supposedly insulated, although in this case the special counsel can be fired. If President Trump thinks this is a witch hunt he can fire [Special Counsel] Mueller if he wants to.

READ MORE: Trump: 'Flynn's Life is Ruined as He Lied to FBI,' 'Nothing Happened' to Clinton

Sputnik: Daniel, do you think that these failed attempts to find Russia's involvement in the 2016 presidential elections actually signal that there was no collusion now, and this is all just the conspiracy against Russia?

Daniel Franklin: I don't think there is a conspiracy against Russia. I will say this: the United States has in the past interfered in the internal affairs of other countries. You know, we don’t have clean hands on this. And I now would say that somebody in Moscow is probably getting a medal right now for having performed very, very well. But at the end of the day governments that we helped to install in Iran, in Chile, in Cuba and Guatemala and places like that were removed by their own people and punished. I am not so much concerned about Russian involvement in American elections.

I expect that Russia and before that the Soviet Union would spy on the United States as we did on the Soviet Union. But what I am concerned about is the Americans who cooperated. It's not that much hostility towards Russia as it is hostility towards the Americans who cooperated. And it's pretty clear that somebody was buying ads on, say, social medium Facebook and those contained false information; so there’s something going on there and it needs to be investigated. But I don't think it's really a witch hunt, but I do think there was some evidence that something was going on.

READ MORE: John McCain Tells Clinton to 'Shut Up' and 'Get Over' Loss to Trump

Sputnik: Let's switch over if we can to President Trump's accusation: the system of justice has double standards because it did not prosecute Hillary Clinton for her alleged misdeeds. What’s your take on that and what effect do you think the plea of guilt has for the ongoing investigation surrounding the Special Counsel Robert Mueller?

Daniel Franklin: The attorney general said in his testimony before Congress that he had asked professional prosecutors to look into Hillary Clinton’s affairs, but the fact of the matter is that there is not as much urgency to that as there is to investigations into the current administration because Hillary Clinton is not in office. So I don't think there is equivalence there at least in terms of the urgency, and then in terms of what she's being accused of – she did have her own personal email account apparently and the question is whether or not there had been some kind of breach of data, which I don't think anybody has demonstrated that it has, so therefore, it is not entirely clear what crime she committed.

Now, there is the Uranium One deal, but I think if we talk to the Russians, if we talk to you, you would say to us that everything was about board on that deal. […]. But it can be investigated I mean they can do it and they are doing it. But we have a saying in the United States: the proof is in the pudding. If she did something wrong I am sure that they have an incentive to find out that she did something wrong.