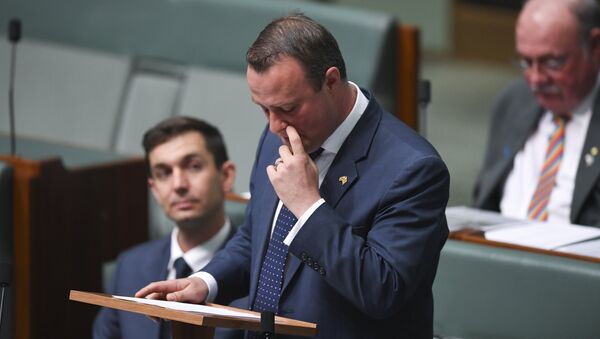 Lawmaker Tim Wilson proposed to his long-term partner Ryan Bolger in the Australian House of Representatives, in a move believed to be the first of its kind in the lower house.

Wilson has been engaged to his partner for nine years and reaffirmed his proposal during a speech shortly after a same-sex marriage bill was introduced in the parliament on Monday.

Here's the moment Tim Wilson proposed to his partner in the House of Representatives pic.twitter.com/WUJOAgyDRA

​His move was greeted with applause from all sides. Deputy Speaker Rob Mitchell congratulated the couple, ABC reported.

The same-sex marriage legislation introduced in the House of Representatives is expected to pass easily after debates on a religious protection amendment, according to the report.

Update: We've dug through Hansard and @timwilsoncomau appears to be the first ever Member to propose on the floor of the House. pic.twitter.com/NLGLxpYIrm

​"Who is it to say that another person should be denied equal rights or that their love is in some way less because of who they love?" said liberal MP Warren Entsch, who introduced the bill.

In particular, the debates on amendments will focus on whether civil celebrants can be allowed to refuse to marry same-sex couples based on their own religious beliefs.

On November 15, the Australian Bureau of Statistics  revealed that 61.6 percent of the population voted yes and 38.4 percent voted no in a two-month national post survey, marking a turning point in a longtime campaign for marriage equality in Australia.

Prime Minister Malcolm Turnbull said a bill to legalize same-sex marriage could be passed by the end of the year.