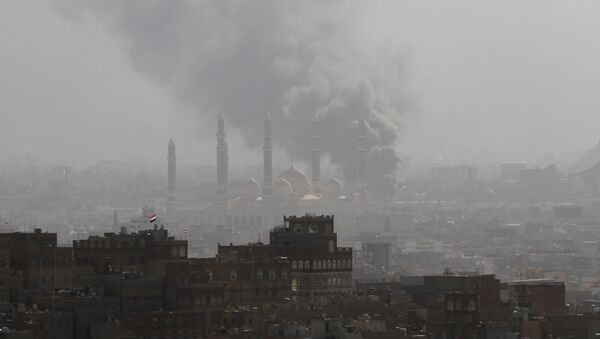 The Saudi-led coalition, which has yet to comment on the report, has apparently found new allies in the years-long conflict in Yemen.

The Saudi-led coalition has allegedly bombed Houthi positions in Sanaa, while the group is fighting the supporters of ex-Yemeni president Ali Abdullah Saleh, the Shiite movement's former ally, local residents and the Saudi-owned al-Arabiya television reported. The information is yet to be commented on by the representatives of the coalition.

According to the broadcaster, the coalition's aircraft struck Houthi outposts in the south of the capital but hasn't specified the number of casualties. At the same time, residents have reported at least five air strikes.

Clashes between the former allies — the Houthis and supporters of former Yemeni president Ali Abdullah Saleh, have been ongoing in the southern districts of the Yemeni capital for several days after an alleged attempt by the rebels to seize the city's main mosque.

In a Saturday speech, described by the Houthis as "deception," Saleh announced that he was ready to turn "a new page" in relations with the Saudi-led coalition if the latter stopped attacking his country.

"We vow to our brothers and neighbors that, after a ceasefire is in place and the blockade is lifted… we will hold dialogue directly through the legitimate authority represented by our parliament," Saleh said.

The Saudi-led coalition welcomed the announcement amid a reported lack of progress in the fight against the former alliance that had taken under its control the entire north of Yemen, forcing President Abd-Rabbu Mansour Hadi to flee into exile.

Following Saleh's address, the Houthis have seized studios of the Yemen Today broadcaster, owned by Saleh, trapping some 20 employees inside, residents say.

According to the International Committee of the Red Cross, the several-day-long clashes left dozens dead and hundreds injured, aggravating an already complex situation that is regarded as one of the worst humanitarian crises in recent times.