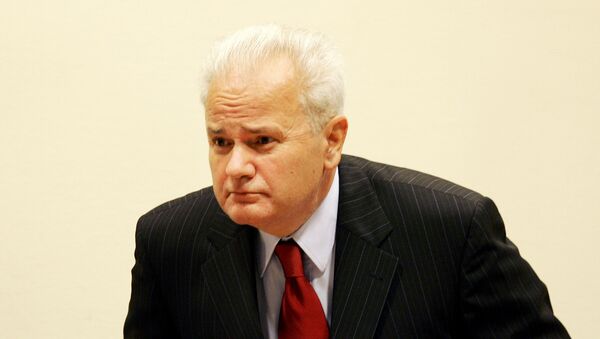 © AP Photo / Bas Czerwinski
Subscribe
The recent death of former Bosnian Croat military leader Slobodan Praljak in The Hague has added to the long and dismal list of suspects, convicts and witnesses who have died since the International Criminal Tribunal for the former Yugoslavia was established nearly 25 years ago.

On Wednesday, Slobodan Praljak drank from a small bottle what he said was poison, as a judge announced his 20-year jail sentence during an appeal hearing in the International Criminal Tribunal for the former Yugoslavia (ICTY). 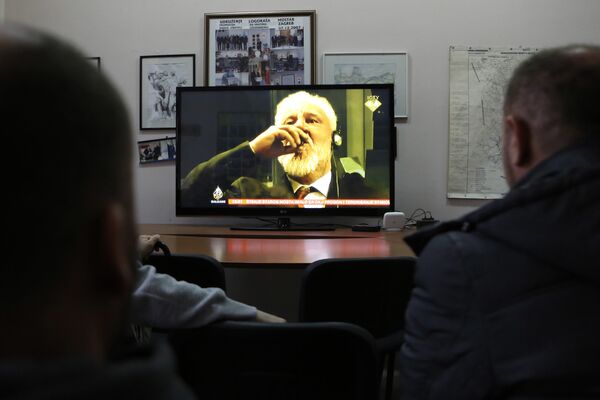 Praljak died a few hours later in a hospital in The Hague. Prosecutors later said that the substance the former military commander took was potassium cyanide, a highly toxic substance. An investigation is underway to find out how Praljak managed to bring the poison into the courtroom.

Praljak has become the 13th individual whose death in some way relates to the tribunal in The Hague.

Milan Babic, the first president of the Republic of Serbian Krajina, an unrecognized state largely populated by Serbs in Croatia, was indicted for war crimes in 2004. He was found dead after he reportedly committed suicide on March 5, 2006, while in the ICTY detention unit in The Hague.

The tribunal confirmed that Babic committed suicide. Media reported that Babi hanged himself using his belt, but this information remains unconfirmed.

Former Serbian Interior Minister Vlajko Stojiljkovic was accused of crimes against humanity and violations of the laws of war. On April 11, 2002, Stojiljkovic shot himself in the head near the House of the National Assembly of Serbia in Belgrade after the Law on Cooperation with the Hague Tribunal was passed. He died in hospital in Belgrade two days later.

Slavko Dokmanovic was a Croatian Serb who was charged with breaching the Geneva Conventions and crimes against humanity by the ICTY for his actions during the time he served as mayor of the Croatian town of Vukovar.

He hanged himself in his cell on June 29, 1998, and his trial ended without a verdict.

The death of Slobodan Milosevic, the former president of Yugoslavia, has been the subject of various conspiracies. He was charged by the ICTY with war crimes and crimes against humanity in connections with the wars in Serbia, Croatia and Kosovo. His five-year-long trial ended without a verdict after Milosevic died of a heart attack in his cell in The Hague on March 11, 2006.

The Tribunal denied responsibility for his death, saying Milosevic had refused to take prescribed medicines and medicated himself instead.

A few days before his death, Milosevic sent a letter to the Russian Foreign Ministry, in which he said an antibiotic had been found in his blood. The former Yugoslavian leader insisted he never took antibiotics during his five years in prison. A toxicologist said that the antibiotic found in Milosevic’s blood diluted the effect of his heart medication.

One of the conspiracies around his death involves Russia. Donald Uges, a toxicologist from Groningen University, told Reuters that Milosevic had taken the drug hoping that the court would agree to transfer him to Moscow for treatment and in Moscow he would be free.

An opposite theory claims that the tribunal could have been behind his death because there was no solid evidence against Milosevic.

A former president of the Executive Committee of the Municipal Assembly of Prijedor, Milan Kovacevic, was indicted by the ICTY of genocide, war crimes and violations of the laws of war. He died from an aortic disruption in his cell on August 1, 1998, before his verdict was delivered.

Ljubisa Beara was the chief of security of the Bosnian Serb Army Main Staff. He was convicted of genocide, murder and persecution and sentenced to a life in prison. He died in prison in Berlin on February 9, 2017.

A former commander of the Army of the Republic of Serbian Krajina, Mile Mrksic, was indicted in crimes against humanity and violations of the rules and customs of war and sentenced to 20 years. He died on August 16, 2015.

Goran Hadzic was the president of the Republic of Serbian Krajina during the Croatian War of Independence. He was accused of crimes against humanity and violations of the laws of war by the ICTY.

In November 2014, he was diagnosed with terminal brain cancer, but the tribunal for several months refused to release him for treatment. Hadzic died from his disease on July 12, 2016.

Serbian general Djordje Djukic convicted for war crimes was released from Scheveningen prison in April 1996 due to cancer and died on May 18, 1996, in a medical military facility in Belgrade. Two other Republika Srpska generals, Momir Talic and General Milan Gvero, died in this facility in 2003 and 2013, respectively.

As many as 19 witnesses concerning Ramush Haradinaj, a former militant and the current prime minister of Kosovo, died. Haradinaj was acquitted on war crimes and crimes against humanity. One witness and his grandson were killed in Kosovo in 2005, despite the fact that the witness was under the tribunal’s witness protection program.

Dusan Dunjic, the key defense witness in the genocide and war crimes case against former Bosnian Serb general Ratko Mladic, was found dead in his hotel room in The Hague on October 22, 2015, on the day he was expected to testify. The Tribunal stated Dunjic died of natural causes. His lawyers, however, argued that he had no health issues. 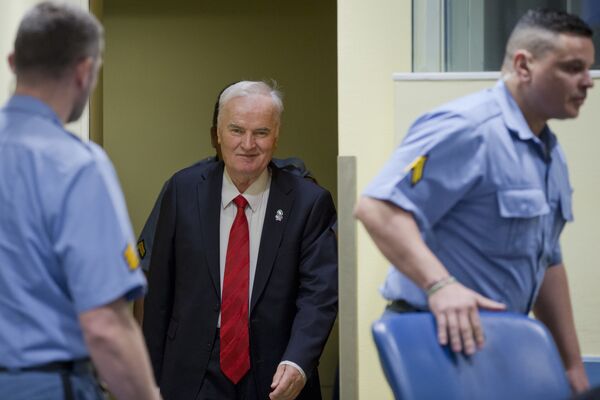 The International Criminal Tribunal for the former Yugoslavia was established on May 25, 1993 to prosecute severe crimes committed during the Yugoslav Wars and try those responsible. Since its establishment, it has indicted 161 individuals on war crimes charges, but secured a conviction against just 33 of them. Several of the highest profile accused have seen many charges against them dropped, and/or the cases against them collapse. The final judgement was issued on November 29, 2017. The Tribunal will formally cease to exist on December 31, 2017.

000000
Popular comments
This tribunal will end on 31-12-2017, but their ''good works'' will be felt for decades. All of the next wars to come will be a direct result of their kangeroo inquisition.