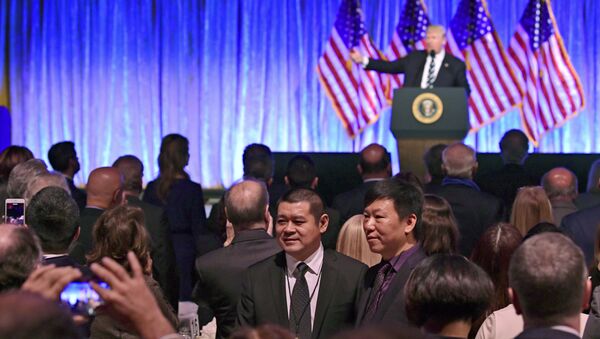 ‘Wrong Thing to Do’: May Slams Trump’s Far-Right Retweets as ‘Hateful’
Donald Trump, the 45th president of the United States, has repeatedly been shown to be the country's most polarizing and disliked leader in national polling, and now the world's high-profile media institutions are acknowledging what many have pointed out since the beginning of his term: that the president is mentally unfit to hold his post.

In recent articles posted from such diverse legacy outlets as The New York Times, The South China Morning Post, The Guardian and even US military watchdog Defense One, the language regarding the US president's mental health has shifted from offering the opinions of third parties to throwing down original content suggesting that Trump's behavior is "an emergency situation."

The South China Morning Post, Hong Kong's newspaper of record since 1903 and an ordinarily cautious voice, took the unusual step of asking "Is Trump an Idiot?" and, answering its own question, stating that "yes" appears to be the correct response, affirming: "monumentally so."

Founded in 1851, America's august media outlet The New York Times has now ceased to pull punches regarding Trump's ability to govern, posting that he appears to "be cracking up," while observing a growing avalanche of reports from within his own administration pointing to the US president's "increasingly unhinged and chaotic" speech, behavior, and actions.

The Guardian, a frequent publisher of anti-Trump rhetoric, has taken to actively detailing the dissolution of the US Republican party and its "miserable choice" of leadership, continually hammering on the fact that "No president has ever polled anywhere near as low as Trump."

Even US military stalwart Defense One is taking the plunge, as a recent piece strongly suggested that the president's favorite means of communication, Twitter, Inc., address what the media outlet refers to as the "ongoing national security threat" presented by Trump's often incomprehensible, and regularly bullying, tweets.

Lawmakers, military chiefs and those in business and finance, as well anyone with access to the internet, appear to be watching with eager interest as — to quote comedian John Oliver — Trump's method of communication increasingly resembles "a drunk driver crashing a pickup truck."

If the increasingly likely possibility of impeachment does occur, however, the US would get Mike Pence as its 46th president, a man described as "quite possibly more dangerous" than Trump, cited by the Huffington Post.

000000
Popular comments
I am not really sure what the fuss is about. Trump is not the first maniac, genocidal or otherwise, to inhabit the White House. And, when you really think about it, he may just be a lot more sane than people like Harry Truman, Ronald Wilson Reagan, Bill Clinton, Bush The Younger, or The Drone King Obama. The people who are playing the "Insanity Card" must do so because the "Russian Collusion Card" turned out to be a totally worthless "joker". The swamp dwellers are not afraid of Trump The Insane. They are afraid that he may just upset that luscious gravy train that gives them billions of dollars for basically nothing.
African Farmer
2 December 2017, 22:59 GMT6
000000
Well, I understand his tweets and would do exactly as he does, but I am a deplorable so can not have an adequate IQ. Anyhow, he has the votes, remember, and against all odds? Votes, one by one, one by one. Polls, well, based on what? 1,000 selected guys? Give me a break.
elsa.zardini
2 December 2017, 23:04 GMT4
000000
Newsfeed
0
New firstOld first
loader
LIVE
Заголовок открываемого материала
Access to the chat has been blocked for violating the rules . You will be able to participate again through:∞. If you do not agree with the blocking, please use the feedback form
The discussion is closed. You can participate in the discussion within 24 hours after the publication of the article.
To participate in the discussion
log in or register
loader
Chats
Заголовок открываемого материала
Worldwide
InternationalEnglishEnglishMundoEspañolSpanish
Europe
DeutschlandDeutschGermanFranceFrançaisFrenchΕλλάδαΕλληνικάGreekItaliaItalianoItalianČeská republikaČeštinaCzechPolskaPolskiPolishСрбиjаСрпскиSerbianLatvijaLatviešuLatvianLietuvaLietuviųLithuanianMoldovaMoldoveneascăMoldavianБеларусьБеларускiBelarusian
Transcaucasia
ԱրմենիաՀայերենArmenianАҧсныАҧсышәалаAbkhazХуссар ИрыстонИронауОssetianსაქართველოქართულიGeorgianAzərbaycanАzərbaycancaAzerbaijani
Middle East
Sputnik عربيArabicArabicTürkiyeTürkçeTurkishSputnik ایرانPersianPersianSputnik افغانستانDariDari
Central Asia
ҚазақстанҚазақ тіліKazakhКыргызстанКыргызчаKyrgyzOʻzbekistonЎзбекчаUzbekТоҷикистонТоҷикӣTajik
East & Southeast Asia
Việt NamTiếng ViệtVietnamese日本日本語Japanese俄罗斯卫星通讯社中文（简体）Chinese (simplified)俄罗斯卫星通讯社中文（繁体）Chinese (traditional)
South America
BrasilPortuguêsPortuguese
NewsfeedBreaking
17:20 GMTPiers Morgan Says World Needs 'Urgent Vaccine' From 'Pampered Prima Donnas' Harry & Meghan
17:18 GMT'Caesar Entering Rome': Ex-Manchester United Boss Calls Cristiano Ronaldo's Return 'Fantastic'
17:10 GMTJoe Biden Receives COVID Booster Shot, Delivers Remarks
17:10 GMTChina Curbs 'Not Medically Necessary' Abortions
17:04 GMTUS Deputy Secretary of State to Visit Geneva for Stability Talks With Russia - State Dept.
16:44 GMTMessi Likely to Play for PSG Against Man City in Champions League, Media Says
16:40 GMTUS Drug Enforcement Administration Warns of Fake Prescription Pills With Fentanyl, Meth
16:37 GMT'Convenient Scapegoat': Imran Khan Urges West Against Blaming Pakistan For 'Unwinnable' Afghan War
16:30 GMTFBI: US Murder Rate Increases 29% in 2020 Amid Pandemic
16:24 GMTBiden’s Domestic Agenda Faces ‘Do-or-Die’ Moment in Anticipation of Three Crucial Votes
16:06 GMTPfizer Starts Second Phase of Testing New Antiviral COVID-19 Oral Drug in Exposed Adults
16:04 GMTIran Denies IAEA Access to Karaj Nuclear Facility Due to Ongoing Sabotage Probe
15:58 GMTParis Says France Not 'Abandoning' Mali by Upgrading Its Military Presence in Sahel
15:49 GMTBiden to Receive COVID-19 Booster Shot Live on TV Monday
15:46 GMTUK to Spend Billions to Become Science & Space Superpower
15:44 GMTOne of Prince Andrew's Legal Battles Reportedly Ends
15:40 GMTTaliban Unpredictability Poses Biggest Constraint for US Evacuation Efforts, State Department Says
15:25 GMTIt Never Rains But it Pours: How Energy Crisis, Brexit & COVID May Backfire on UK This Christmas
15:08 GMTAstraZeneca, Sputnik Light Combo Causes Strong Neutralizing Antibody Response, RDIF Says
15:04 GMTChina Slams UK for Harbouring ‘Evil Intentions’ After British Warship Sails Through Taiwan Strait