Millions Die 'Because Access to Treatment is Blocked' – Anti-HIV Activist 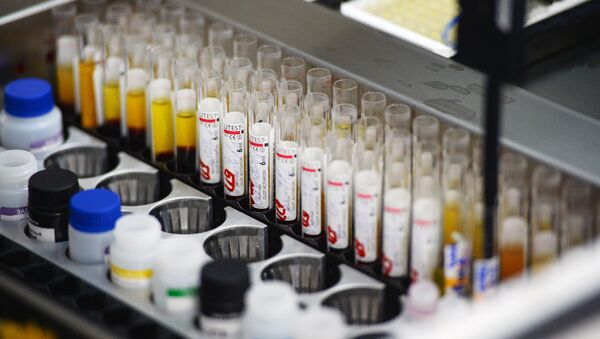 © Sputnik / Alexandr Kryazhev
/
Go to the photo bank
Subscribe
Just as World AIDS Day was being marked around the globe on Friday, Dan Glass, AIDS Coalition to Unleash Power (ACT UP) London activist told Radio Sputnik that the high cost of drugs prevents the effective treatment of many HIV patients.

According to the World Health Organization, some 40 percent of people with HIV — over 14 million in all – remain undiagnosed while up to 2.5 million people were newly infected in 2015.

The organization has called for HIV testing and medicines to be dramatically accelerated in order to end AIDS by 2030.

“'Every year 10 million people die of diseases because access to treatment is blocked by drug pricing. Unregulated pharmacies and the privatization of our health services remains a huge threat,” Dan Glass said.

When asked whether the AIDS Coalition has been successful in its efforts to reduce pricing on medication, he said that one big achievement here was the provision of cheap medicine made for people who are vulnerable to HIV infection, which has resulted in a 90-percent reduction in HIV cases.

“This is incredible, because people now have access to such medication, which is something they didn’t have before. This is a challenge to pharmaceutical companies,” Glass noted.

Human Trials of 'Global HIV Vaccine' Begin in Southern Africa
Speaking about the discrimination people with HIV face in their daily life, he said that HIV-AIDS knows no barriers and just about everyone in the world is susceptible to HIV.

“Still, there are so many stigmas around this. We still see people making HIV-phobic statements in the UK and migrants being denied access to proper HIV treatment, which perpetuates this stigma,” Glass said.

“HIV remains the biggest threat to our health,” he added.

When queried if it will be possible to end HIV by, say, 2030, Dan Glass said that serious changes are needed, such as laws regulating the privatization of companies which are part of the National Health Service.

“It’s not just about distributing medication free to pharmacies, but really holding pharmaceutical companies accountable for the many people who are dying because of their actions. We need to keep the pressure on,” he emphasized.

Observers say diagnosing HIV/AIDS remains one of the most significant health challenges, especially among low- and middle-income people.

So far, some 35 million people have died from HIV-related causes, including 1.1 million in 2015.

According to the World Health Organization, over 36 million people were living with HIV in 2015, but only 21 million, including almost 2 million children, were receiving treatment for the disease in 2017.