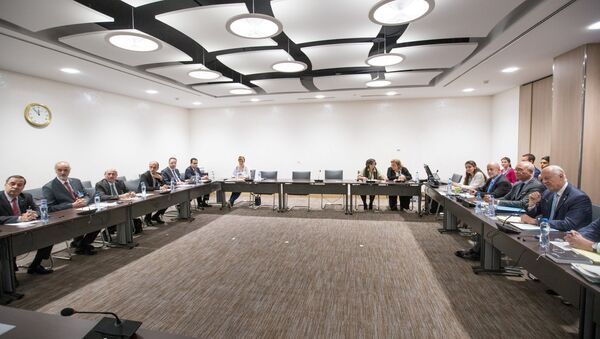 © REUTERS / Xu Jinquan/Pool
Subscribe
The eighth round of the intra-Syria talks in Geneva has started on November 28 with newly formed unified opposition delegation, but so far, the differences between opposition and the government have become even more acute.

GENEVA (Sputnik) — The eighth round of the intra-Syria talks in Geneva, which started on November 28 under the UN mediation, is now put on pause at least until Tuesday, apparently to give sides a chance to refresh and come back to the Swiss city in a better mood and with a more compromise-ready position.

So far, the round has been remarkable for gradually turning into a "war of all against all."

The contradiction between the government delegation in Geneva, led by Syria's Permanent Representative to the United Nations in New York Bashar Jaafari, and the opposition side, comprising various platforms, is well-known: the opposition insists that current President Bashar Assad "must go," and the government simply cannot talk to someone who says that.

During this round, however, the differences have become even more acute.

The opposition side made an effort: they finally formed a unified delegation for the talks. Previously, they — various opposition platforms — were quarrelling among themselves, refusing to recognize each other's right to exist. So, all that the government had to do in such a situation was just watch them fighting and say there was no counterpart at the talks, no delegation to negotiate with, especially directly.

Geneva-8 Talks on Syria Turned Into Shuttle Talks Format
However, on November 22-23, numerous Syrian opposition platforms held an extensive conference in Riyadh and managed to create a single negotiations team, compiled of the representatives of the Syrian Coalition, National Coordination Committee, Moscow and Cairo platforms, as well as independents. They also worked out a detailed policy paper and negotiations program — Riyadh final communique. They kept there their major requirements — for President Assad to leave his post at the early stage of the transitional period, and for the Iranian military police to leave the country.

One could expect direct talks, with both sides finally having distinct outline. However, the government team demonstrated no desire to even show up to talk to the others. Jaafari and other delegation members arrived in Geneva one day after the negotiations started, already after rumors spread they might not come at all.

Speaking to journalists only once after his meeting with UN Special Envoy for Syria Staffan de Mistura, Jaafari accused the opposition of setting preconditions for the talks, and called Riyadh-2 communique a clear provocation and irresponsibility, "undermining the path of Geneva-8." He left Geneva for consultations in Damascus and said "he will see" whether to return or not.

The opposition, in turn, called the departure of the government a demonstration of irresponsibility and preconditions for the talks.

De Mistura tried to regain control over the situation. Late on Wednesday, he issued a didactic statement, in which he recalled his previous "requests that delegations participating in the intra-Syrian talks refrain from statements aimed at delegitimising other invitees," and "having however noted unhelpful statements in recent days," he urged the sides to stop such behaviour.

Unable to persuade the sides to have a direct dialogue, de Mistura tried a new, more intensive strategy of mediation: shuttling between the two rooms just within five meters from each other, where the delegations stayed.

Nevertheless, the negotiations were put on hold at least until December 5 when the invitees are expected to gather again and continue the efforts to find a peaceful solution for the Syrian civil war.

Jaafari told reporters before leaving that de Mistura had exceed his mandate as a mediator by proposing his own document on the Syrian settlement.

"We are not negotiating with a mediator, but through him. We oppose not the content of the document, but its form," Jaafari said.

Russian Ambassador to the UN Office in Geneva Alexey Borodavkin said on the first day of negotiations, November 28, that he had little hopes for Geneva-8, as Moscow had concerns about the format and the composition of participants, meaning inclusion in the opposition's delegation those who have a "non-constructive" and "detached from the Syrian realities" approach, according to the envoy.

Still, Moscow supports de Mistura's intention to continue this round of talks, and hopes that "the common sense will prevail among the opposition delegates, they will manage to see the political and military realities in Syria and correct their position, work out approaches for negotiations, instead of repeating pointless radical demands," Borodavkin said.

It is still too early to say whether de Mistura succeeded or failed in Geneva-8. Next week, the special envoy will continue his shuttling diplomacy.

000000
Popular comments
OK let's go to round 9 with nobody present. Its really strange when you are called to negotiate with terrorists.
giorgoskaz11
3 December 2017, 00:57 GMT3
000000
President Assad has the votes of Syrians, that is a fact, now more than ever. The Opposition could have had the votes of Terrorists were they alive, that is, provided that the Opposition is composed of Syrians living (living) in Syria, which nobody knows.
elsa.zardini
3 December 2017, 01:04 GMT1
000000
Newsfeed
0
New firstOld first
loader
LIVE
Заголовок открываемого материала
Access to the chat has been blocked for violating the rules . You will be able to participate again through:∞. If you do not agree with the blocking, please use the feedback form
The discussion is closed. You can participate in the discussion within 24 hours after the publication of the article.
To participate in the discussion
log in or register
loader
Chats
Заголовок открываемого материала
Worldwide
InternationalEnglishEnglishMundoEspañolSpanish
Europe
DeutschlandDeutschGermanFranceFrançaisFrenchΕλλάδαΕλληνικάGreekItaliaItalianoItalianČeská republikaČeštinaCzechPolskaPolskiPolishСрбиjаСрпскиSerbianLatvijaLatviešuLatvianLietuvaLietuviųLithuanianMoldovaMoldoveneascăMoldavianБеларусьБеларускiBelarusian
Transcaucasia
ԱրմենիաՀայերենArmenianАҧсныАҧсышәалаAbkhazХуссар ИрыстонИронауОssetianსაქართველოქართულიGeorgianAzərbaycanАzərbaycancaAzerbaijani
Middle East
Sputnik عربيArabicArabicTürkiyeTürkçeTurkishSputnik ایرانPersianPersianSputnik افغانستانDariDari
Central Asia
ҚазақстанҚазақ тіліKazakhКыргызстанКыргызчаKyrgyzOʻzbekistonЎзбекчаUzbekТоҷикистонТоҷикӣTajik
East & Southeast Asia
Việt NamTiếng ViệtVietnamese日本日本語Japanese中国中文Chinese
South America
BrasilPortuguêsPortuguese
NewsfeedBreaking
09:07 GMTWoman Accusing Chris Cuomo of Sexual Misconduct Used to Work With Ex-CNN Host at ABC, Media Says
09:05 GMTVenezuelan 'Opposition Government' FM Resigns, Slamming It for Corruption and Incompetence
08:50 GMTTaiwan to Accelerate Construction of Home Grown Submarine Prototype, Reports Say
08:31 GMTRussia, India Sign Military Cooperation Agreement for Next Decade
08:17 GMTArgentina Greenlights Sputnik Light Both as COVID-19 Vaccine and Booster Shot
08:13 GMTDoctors in India Hold Nationwide Protest Against Delay in Medical Exam Counselling
08:12 GMTOne Year After Israel-Morocco Normalisation Pact, Trade and Business Still Sluggish
07:49 GMT'Sleepy Joe Stole Christmas': Trump's Save America PAC Pans Biden for Nightmare Supply Chain Crisis
07:14 GMTIndia and Russia Sign Number of Military Agreements and Contracts
07:13 GMT'You Can't Erase Internet': Alec Baldwin Slammed for Deleting Twitter Account After Rust Interview
07:08 GMT'World-Class' 1,000-Year-Old Egyptian Earring Found in Danish Field Perplexes Researchers
07:04 GMTKylian Mbappe Opens Up on His PSG Future Amid Real Madrid Transfer Rumours
06:55 GMTPoll: Most Japanese Back Ban on Visas for Foreigners Amid Omicron Concerns
06:48 GMTOne Dead and Four Injured in Prison Fire in Northwestern Russia
06:25 GMTBoris Johnson Under Fire Over 'Planned Reform Allowing Ministers to Overrule Judicial Rulings'
06:14 GMT21st India-Russia Summit: What's on Agenda as Putin Set to Arrive in New Delhi to Meet Modi
06:03 GMTMyanmar's Aung San Suu Kyi Reportedly Sentenced to Four Years in Prison
05:43 GMTDanish Professor Says Omicron to Become Dominant Strain Amid 'Worrying' Increase in Cases
05:37 GMTUS Intel Resorting to 'Unprecedented Sharing' to Convince EU of Russian 'Invasion' Plans in Ukraine
05:02 GMT'I Am Sorry of Course': Danish PM Apologises for Shopping Maskless