People 'Not Warned Enough About Terrible Consequences of Overeating' – Scholar 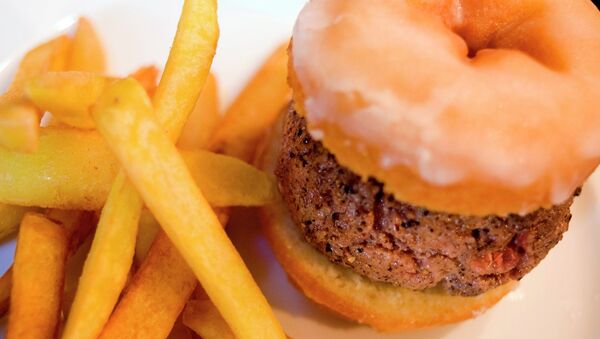 With diabetes accounting for over five percent of new cancer cases in the UK, Tam Fry, head spokesperson for the National Obesity Forum, told Radio Sputnik that people are not exercising enough and not eating healthy food to avoid this deadly condition.

A team of British scientists has found that diabetes is a key factor behind the global surge in the number of cancer cases, affecting nearly 800,000 Britons in 2012.

“We are projecting that the five-fold increase predicted by researchers is absolutely correct,” Dr. Fry said.

Britain's Fat Shame: Obesity Levels Make Nation Worst in Europe
When asked about the relationship between obesity and cancer, he said that when people eat too much and don’t exercise enough, they retain all the unwanted fat and calories and their body mass increases.

“When it gets around the body mass index of 30, you start to trigger diabetes, heart conditions and cancer. However, there are 12 or 13 other conditions whereby being too fat you are starting to interrupt the normal process which the body was never constructed to undergo,” he explained.

Tam Fry continued to say that over a fourth of the UK population is obese and the figure keeps rising.

“People have not been warned enough about the terrible consequences of overeating. In my view, nobody, if told properly, will want to court disaster by overeating, and the fact that most people seem to be ignorant about the consequences of obesity is the reason why we have such high figures now.”

Fry also mentioned the role of fast food and the government’s inability to dictate to the food industry.

“What the food industry does is voluntarily controlled by the food industry, and that is a disaster because [fast food] is full of high levels of fat, salt and sugar put in to excite the taste buds. They are hugely addictive both to adults and children,” Fry noted.

He added that in a bid to overcome this, the government is trying to persuade the food industry to reduce the content of fat, salt and sugar in their products in order to make them healthier.

China's Obesity Surge Hits 440 Million Residents
“Unfortunately, the food industry controls so much in the UK in terms of employment, in terms of manufacturing and in the  economy that they will basically tell the government, ‘We do  what we do, we understand the problem, that we need to be part of the solution, but we’ll do it in our own time. Leave us alone,’” Tam Fry said.

He added, however, that there would be a sugar levy introduced in the UK on April 1 of next year.

“Not to pay the levy, the drinks industry has decided to take out sugar from their fizzy drinks. Coca Cola will only have one of its 29 brands on sale in the UK, which will have to pay the levy. The food industry and the drinks industry will eventually find that a lot of people have been persuaded to use fizzy drinks that do not contain so much bad ingredients, and realize that their income increases,” he noted.

“When the next version of this levy comes along to deal with things people buy at coffee bars then this will slowly start to turn the tide of obesity. But this may take 10 to 15 years in my estimate,” Tam Fry concluded.

About 4 million people in the UK have diabetes, with 90 percent suffering from Type 2.

Furthermore, an estimated half a million people in the UK may suffer from this type of disease, without it being diagnosed, while millions fo others are at risk of developing this condition.