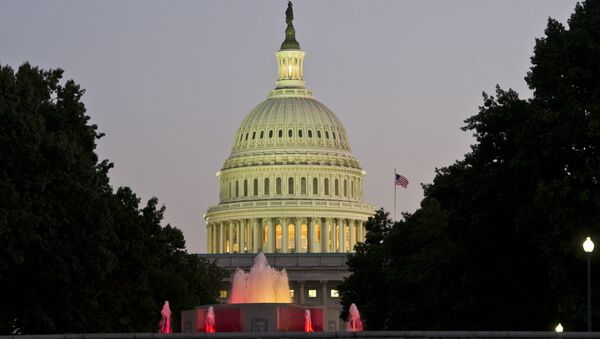 © AFP 2021 / MLADEN ANTONOV
Subscribe
The scandal has taken on new proportions as more and more women come out to accuse the politicians of sexual harassment.

Allegations Against US Senator Al Franken

US Army veteran Stephanie Kemplin, 41, revealed in an interview with CNN that Franken sexually harassed her in 2003 before he went into politics.

According to Kemplin, the incident occurred during her deployment in Kuwait when she was taking a picture with Franken, who at that time was a comedic actor and writer.

"When he put his arm around me, he groped my right breast. He kept his hand all the way over on my breast," the woman said.

Kemplin confessed that she was stunned and waited for Franken to move his hand away, but eventually was forced to turn her body to get Franken's hand off her breast before the photo was taken.

The interview came following the statements of two other women made to The Huffington Post on condition of anonymity, in which they accused the politician of groping their bottoms in separate incidents.

Last week, another woman named Lindsay Menz said Franken groped her while posing for a photo at the Minnesota State Fair in 2010 in what has become the first accusation of sexual misconduct against the politician while in office. Earlier, radio host Leeann Tweeden claimed that the politician touched and kissed her without her consent in 2006.

Claims Against US Congressman John Conyers

Marion Brown, a former staff member under Rep. John Conyers, described how the politician "violated" her body and made inappropriate proposals during an interview with NBC's "Today" show on Thursday.

The woman alleged that Conyers regularly harassed her during her 11 years working on his staff, invited her to hotel rooms under the pretense of discussing business issues and propositioned her for sex.

Brown is one of numerous women who have accused Conyers of sexual misconduct. Earlier, she made her statements on the condition of anonymity.

For his part, the politician has denied all allegations and resisted to resign from Congress despite severe pressure. Earlier, however, he left his position as the ranking Democrat on the House Judiciary Committee.

Social media users were quick to react to the new allegations against US politicians.

Many of them immediately demanded their resignations.

Why drag this thing out. This will not end. There will be more accusers. Why? Franken is a serial groper. Get this guy out of the senate.

BRAVO LADIES: Melanie Morgan, Juanita Broaddrick, Kathleen Willey, and Leslie Millwee Demand an apology frm Al Franken but He Hides Behind His office Door like a Coward!
“ We Are Here to Drain the Swamp, One Sexual Predator at a Time! ”#Hannity #MAGA
pic.twitter.com/aweUAiowDz

​Some suggested that the US Congress needs reforms:

Thank you to Congressman John Conyers for reminding us why both the House & Senate desperately need term limits.

An 88-year-old man used our taxpayer money to hush a sexual assault accuser from a settlement slush fund.#JohnConyers

​While others argued that the resignation of a couple of politicians is not enough and that the investigation should take on a broader scale.

Nancy Pelosi finally agreeing Michigan rep. John Conyers should step down is NOT enough. #UnsealTheDeals and all 260 cases of sexual harassment and congressmen involved.

Until then, empty virtue signaling #ThursdayThoughts