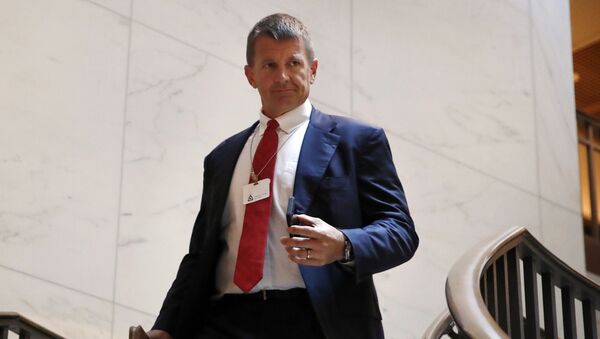 Blackwater founder Erik Prince regards the probe into Russia's alleged meddling in the 2016 US election as a "meaningless fishing expedition."

MOSCOW (Sputnik) — Erik Prince, the founder of the Blackwater private security contractor, now known as Academi, and a supporter of President Donald Trump, told the House probe into Moscow's alleged interference in the US presidential election that he had met Kirill Dmitriev, the head of the Russian Direct Investment Fund (RDIF), in January, but not on behalf of the president or his team, the Washington Post newspaper reported.

Prince admitted to have a meeting with Dmitriev in the Seychelles on January 11, briefly and in an informal setting, the newspaper reported, citing several people "familiar with the interview."

The Blackwater founder reportedly called the House Intelligence Committee probe a "meaningless fishing expedition," stressing that he was only linked to Trumps's campaign as a "donor" and "an interested voter."

In its turn, the RDIF has earlier issued a statement, which reads that the fund has always operated in full compliance with relevant regulations and "reserves all rights to protect its legitimate interests and be compensated for any harm caused by misleading statements."

Why Story of Russia's Meddling in 2018 Mexican Vote Causes Laughter
Both the Senate and House of Representatives are looking into the Trump campaign's alleged "collusion" with Moscow, a claim repeatedly denied by Russia calling it "absurd" and "groundless."

Separately, the FBI is conducting its own probe into the issue dubbed a "witch hunt" by the US president, with Robert Mueller appointed as a special counsel to lead the investigation.

The claims of alleged Russian meddling have been fueled by a January report by the US Director of National Intelligence (DNI) covering the release by Wikileaks of thousands of Democratic National Committee emails and other data, including the personal emails of Hillary Clinton's campaign chair John Podesta during the 2016 US election campaign.