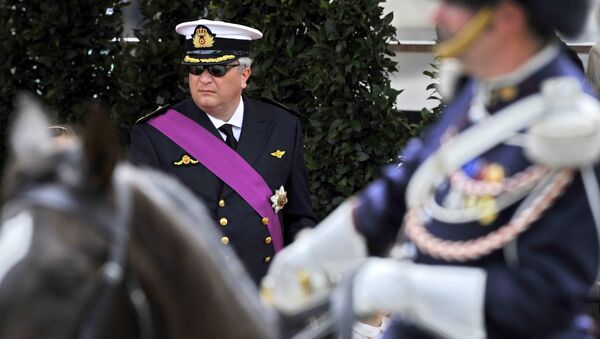 © AFP 2021 / ERIC VIDAL/BELGA
Subscribe
Laurent, the 53-year-old prince of Belgium and a junior sibling of King Phillipe, has bombarded with criticism the government’s intention to cut his annual endowment in violation of his fundamental rights. This would “deprive him and his family of all livelihoods,” The Guardian cited the Laurent camp as saying.

The measure closely followed Laurent’s unauthorized appearance in full naval uniform at a celebration of the 90th anniversary of the founding of the Red Army, held at the Chinese Embassy in Brussels earlier this year.

On another level, I'm also really into this picture of Prince Laurent of Belgium pic.twitter.com/Ag9qe5SB8x

​To talk over the matter, Prime Minister Charles Michel called a special meeting, which Laurent missed, having provided a sick note. Some time later, his lawyer handed a seven-page letter to the Belgian premier, in which Laurent lashed out at the government’s attempts to limit his meetings with foreign representatives, saying they were driving him into "social isolation." He cited the breach of Article 8 of the European Convention on Human Rights.

Laurent’s lawyer also suggested the prince, a trained helicopter pilot, has been stopped in "illegal ways" from finding employment throughout his entire life, in a manner undermining his "image and, dare I add, his health."

"In this traditional view, a prince was not allowed to work (it would testify to ‘a desire for money,’ a reproach that some people dare to repeat today, which is the world upside down!)," he said, as reported by The Guardian.

The leaked letter deemed as illegal the government’s proposed action against the prince before he was given a chance to speak out in his defense. His camp went still further in their assessment saying the financial measure should be replaced with an obligation to give, for instance, a 10-day notice ahead of Laurent’s planned meetings.

Between 2008 and 2010 the wayward prince went on frequent visits to Libya, where he had planned to set up business ties with one of Muammar Gaddafi’s sons. A warning followed, but it didn’t stop the youngest son of the former king and queen, Albert II and Paola, from going to an unauthorized meeting with the prime minister of Sri Lanka, Ranil Wickremesinghe.

The prince’s letter came in line with the overall impression that Laurent made on the Belgian public, namely that of an eccentric but harmless man, claiming on more than one occasion that his family "has never supported" him.

Last year, the Belgian Court of Audit, the financial monitor of the country’s public institutions, obliged Laurent to repay 16,000 pounds to the Belgian state to cover his ski holiday expenses, as well as a series of supermarket bills and his children’s tuition fees.

000000
Popular comments
arrogance beyond believe. Then again did we expected anything else from that 0.1% mafia?