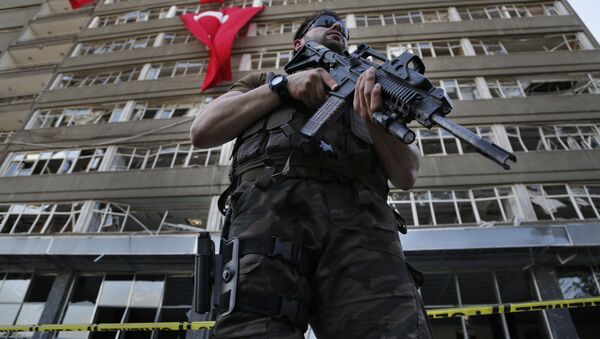 © AP Photo / Hussein Malla
Subscribe
Since the thwarted coup in Turkey, the authorities have arrested hundreds of military personnel, activists and journalists on suspicion of having links to the Fethullah Terrorist Organization.

ANKARA (Sputnik) — Turkish prosecutors have issued an arrest warrant for Graham Fuller, a former employee of the US Central Intelligence Agency (CIA), over his alleged involvement in the 2016 coup attempt, the Hurriyet newspaper reported Friday.

Graham, who served as vice chairman of the National Intelligence Council of the CIA, resided in Turkey during the attempted coup in July 2016 and left the country after it failed, according to the newspaper.

The Istanbul Chief Public Prosecutor’s Office reportedly believes that Fuller obtained sensitive information for political and military espionage. He is also suspected of having contacts with Henri Barkey, the former director of the Middle East Program at the Woodrow Wilson International Center for Scholars, as well as accused of organizing and orchestrating the coup alongside other suspects.

Over 600 Senior Turkish Officials Asked for Asylum in Germany Since Coup Attempt
A military coup attempt took place in Turkey on July 15, 2016, but was suppressed the following day, leaving over 240 people dead and an estimated 2,000 wounded. Turkey has accused Islamic cleric Fethullah Gulen, who has been living in the US state of Pennsylvania since 1999, and his movement, which Ankara refers to as the Fethullah Terrorist Organization (FETO), of playing a key role in the coup attempt. Gulen has refuted the allegations. Since the thwarted coup, Turkey has arrested hundreds of military personnel, activists and journalists on suspicion of having links to FETO.