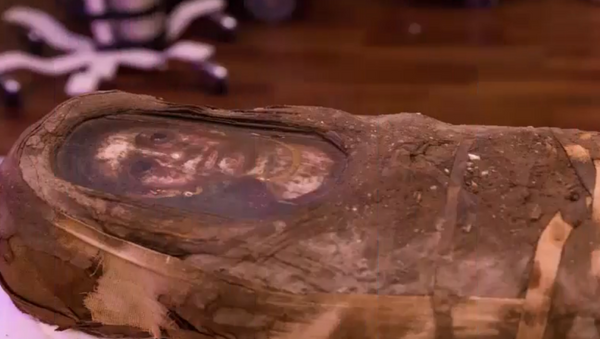 © Screenshot/Science and More
Subscribe
Rather than holding a mummy-unwrapping party, scientists spent a full 24 hours on Monday scanning the infamous Hibbard Mummy with a high-energy x-ray machine to see if they could crack the mystery of the 1,900-year-old specimen.

Archaeologists Discover Egyptian Mummy With Golden Burial Mask (PHOTOS)
Unearthed by archeologists in 1911 in Hawara, Egypt, the mummy, which is that of a five-year-old girl, was moved Monday to the Argonne National Laboratory in Washington, DC, by Northwestern University researchers in an effort to "piece together her story."

Though researchers from the university say there is still loads of information to break down and analyze, they were able determine in their preliminary findings that the 50-pound child likely succumbed to a disease such as smallpox or malaria, since she showed no visible injuries.

But that wasn't the only thing officials noticed in the CT scans: scientists found an assortment of objects wrapped with her, and some even buried inside her body. 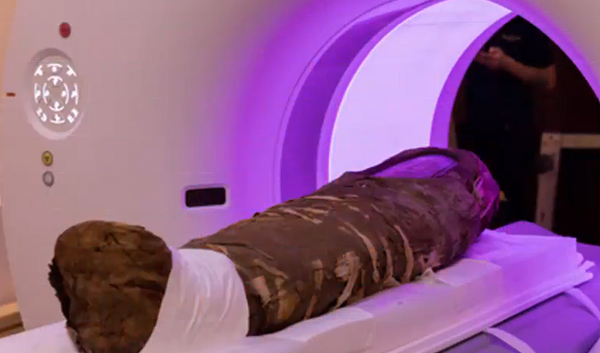 In the mummy's head researchers detected a bowl-shaped object that they say replaced the brain during the mummification process. They also found wiring in her teeth and roughly two dozen small pins inserted into wrappings around her head. Though researchers haven't been able to fully identify the object, they also detected a stone-like shape of something placed inside the mummy's stomach.

"The resolution on the CT scan is such that we can only barely make out a shape," Olivia Dill, a participant in the study, told PBS NewsHour. "We think it's some sort of stone, but we're not sure."

Officials later detected the same type of small pins found around the mummy's head along its feet.

"This is a once-in-a-lifetime opportunity for our undergraduate students — and for me — to work at understanding the whole object that is this girl mummy," Marc Walton, a researcher with the school, said in a statement. "Today's powerful analytical tools allow us to nondestructively do [what] the archaeology scientists couldn't do 100 years ago."

"All the information we find will help us enrich the entire historic context of this young girl mummy and the Roman period in Egypt," Walton added.

As the researchers are trying to paint a picture of the mummy's story, another of the study's participants is also trying to see what lessons can be learned from her bone tissue.

Believe It or Not: Peru's Alien Mummy Baffles Scientists (VIDEO)
For Stuart Stock, examining the bone structures of the mummy could allow researchers to better predict bone fracture risks.

"There are epidemiological studies that say peak muscle mass and bone mass are protective through life, particularly for women," Stock said in a statement. "I wanted to compare populations who had an active lifestyle with our more modern sedentary populations — is there a difference in bone quality?"

"Right now in osteoporosis, we can look at bone density and trabecular bone structure and maybe predict fracture risk correctly 80 percent of the time," Stock added, saying, "We need to improve our predictive ability to around 95 percent, so we've got to track down additional factors."

The Hibbard Mummy, one of many from the Garrett-Evangelical Theological Seminary at Northwestern, is most notable for its face. Instead of having golden, three-dimensional face masks like King Tut, portrait mummies faced the afterlife behind a wooden panel with a more life-like image of what the person looked like prior to their death.