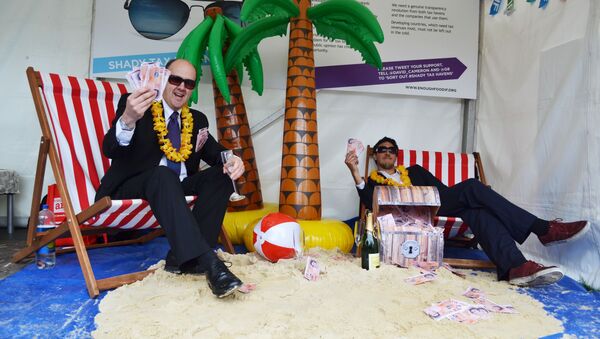 CC BY 2.0 / Trocaire / Campaigners at the IF campaign concert in Belfast Botanic Gardens
Subscribe

If it is to be fair, the EU's planned blacklist of tax havens will include four EU member states, according to a blacklist drawn up by Oxfam; the charity's tax expert Johan Langerock, told Radio Sputnik that the EU is taking a step in the right direction but it remains to be seen whether member states have the will to really tackle the issue.

In the wake of the Paradise Papers publication earlier this month, which revealed widespread offshore tax avoidance by wealthy elites, the European Commission has redoubled efforts to get EU member states to agree a blacklist of global tax havens and potential counter-measures.

On Wednesday, the charity Oxfam released its own "robust blacklist of tax havens," which contains four EU countries "that would be blacklisted if the EU were to apply its own criteria to member states."

Johan Langerock, Oxfam tax expert and co-author of the report, told Radio Sputnik that the EU must not bow to political pressure in excluding influential states inside and outside the EU, which offer tax advantages for foreign multinationals or wealthy individuals.

Sputnik: Your report says the EU tax haven blacklist should include at least 35 non-EU countries and four member states of the EU. Why did you choose these countries?

Paradise Papers: Formula One Champion Avoided Tax on Private Jet
Johan Langerock: This report assesses which countries should be on the EU blacklist, which is expected to be released next week, by applying the EU's own criteria objectively. At Oxfam, we applied the EU's criteria objectively and then we see that 35 non-EU countries should be on the blacklist.

Those countries are varying: a country like Albania could be on the list, but more important tax havens like Bermuda, Curacao, the Cayman Islands, Hong Kong, Singapore and Switzerland are also on our list. These are very famous tax havens, they appeared in many leaks recently, the Paradise Papers for example, so I really urge the EU to have an objective list and to have these harmful tax havens on the list as well.

We know, for example, that Switzerland is putting a lot of pressure on the EU to not be on their list, but if we apply the criteria objectively, Switzerland can't escape the final EU blacklist.

Sputnik: A recent report by the Tax Justice Network has suggested that while the European Union will not include its member states on the list, it could add Britain when it leaves the bloc in 2019. How realistic do you think that is?

Johan Langerock: The Tax Justice Network and Oxfam actually conducted a similar analysis and found our results are very similar, which is very good and shows that our analysis is very strong. But, on criteria two, fair taxation, we have a few differences. Oxfam identified four EU member states that failed that criterion as well: Ireland, Malta, Luxembourg and the Netherlands. The Tax Justice Network adds the UK and Cyprus to it.

Tax Them on Sales: UK Chancellor's 'Interim Measure' in Tech Giant Crackdown
At Oxfam, based on our own analysis we don't believe that the UK would fail criteria two on fair taxation as, following our economic indicators, Britain is not attracting disproportionate profits to its jurisdiction.

Of course, there are discussions about the City of London being a kind of tax haven, but the problem is that's not being assessed, as such, by the EU. So, it seems quite unlikely to me personally that Britain will be blacklisted after leaving the EU but of course, if the EU changes its tax policies it could always be blacklisted at a certain point of time.

Sputnik: How serious do you think the EU and Brussels are in addressing the situation with regard to tax havens?

Johan Langerock: The European Commission has been very ambitious on its fair taxation agenda. There have been many directors over the last years and months who have taken very good steps forward to a fair tax system. So, the ambition is there to have a strong backlist but now it's up to the member states and it's a discussion among member states.

As the Commissioner [for Economic and Financial Affairs, Taxation and Customs] Moscovici to the press yesterday, the blacklist will finally reflect the ambition of the member states. So, if member states are ambitious, we will have an ambitious blacklist, if they are not, we will have a weak blacklist which won't solve the problems of tax havens.

What impact does this issue have on EU member states and citizens? What can the general public do to put more pressure on Brussels over the matter over the next few years?

The public has to continue to show its disappointment with governments for not tackling the problem of tax avoidance, and clearly show there is an injustice going on. While a normal person pays on average 40% of taxes, a big company like Apple can just get away without paying taxes on a large scale. So, if the public continues to showcase this injustice and keeps on pleading for better rules, then governments in the end will change their rules.