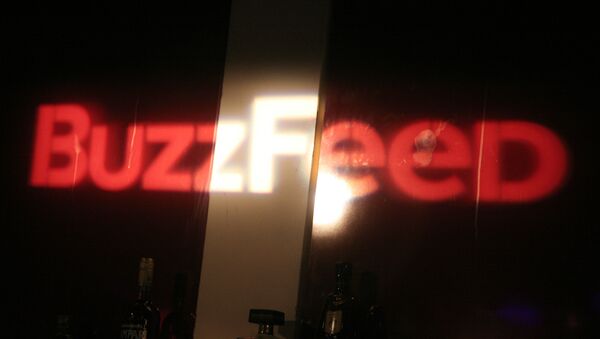 © AP Photo / Andy Kropa
Subscribe
The US Department of Justice (DOJ) has thrown out viral media company BuzzFeed’s argument that their revelation of the infamous Fusion GPS Trump-Russia dossier was part of their “fair reporting privilege.” BuzzFeed has been slammed with a lawsuit as a result of some of the scandalous and unverified accusations contained in the dossier.

The 35-page dossier, compiled by opposition research firm Fusion GPS and former MI-6 agent Christopher Steele, was unveiled to the public by BuzzFeed in January. The dossier is stuffed with incendiary claims, but the one that got BuzzFeed and Steele in trouble was a claim that Russian billionaire Aleksej Gubarev acted as a Russian intelligence agent to hack into the computers of the US Democratic National Committee.

Gubarev, founder of domain hosting network Webzilla, is suing BuzzFeed for libel in a Florida court. He is also suing Steele for the same charge in London. BuzzFeed argued that they enjoyed "fair reporting privilege" to publish the report as it was part of an ongoing FBI investigation. Therefore, they say, they were not liable in Gubarev's libel suit because the dossier was posted under accepted journalism practices.

But the Justice Department pointed out that when BuzzFeed published the dossier back in January, they didn't invoke the FBI probe — and the dossier was compiled by an independent research firm, not a government agency. As such, it isn't "privileged" information and BuzzFeed is culpable for any wrongdoing the court finds was committed in the act of publishing.

"Although the Article states that BuzzFeed decided to publish the so-called Dossier to provide readers an opportunity to 'make up their own mind' about its explosive but unverified allegations, BuzzFeed now contends in its motion to compel that the Article is nothing more than a report on official government proceedings," the DOJ lawyers wrote.

"I feel somewhat vindicated," Val Gurvits, one of Gubarev's attorneys with the Boston Law Group, told The Washington Times. "We're not the only ones that see that BuzzFeed's attempts to defend its actions after the fact are really nothing more an afterthought to try to limit their liability."

"[BuzzFeed's] position seems to be, if the government happens to read something as part of doing its job, all of a sudden that becomes a government document that you can now publish it, which is an asinine position because if that was true, all I would have to do to ruin my neighbor's reputation is [write] a letter to the FBI accusing my neighbor of orchestrating 9/11, sending a copy to BuzzFeed, and then BuzzFeed would have the unfettered right to publish that false letter."

The story of the dossier is long and convoluted. It was originally funded by Republican donors who opposed then-candidate Donald Trump when he was attempting to secure the Republican presidential nomination. When it became evident that Trump was destined to be the nominee, the dossier's backers became the Democratic National Committee and the Hillary Clinton — hoping to find some evidence of criminal activity with which to discredit Trump.

The dossier eventually took on the goal of exploring alleged collusion between Trump and Russian actors. Fusion GPS retained Steele, who had many connections in Moscow from his time in MI-6, and he compiled the dossier. The DNC's money paid Fusion to pay Steele, who used that money to pay off his Russian intelligence sources to compile the dodgy document.

In July 2016, Steele shared what he had compiled with the FBI, which would eventually use his findings in their investigation of alleged collusion between the Trump campaign and Russian actors. However, the document remains almost entirely unverified nearly 11 months after its original unveiling.