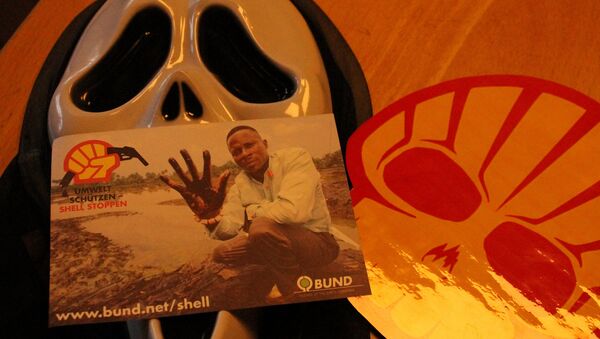 A recent Amnesty International report into Shell's role in atrocities committed by the Nigerian security forces in oil-rich Ogoniland is a welcome impetus toward investigation of the violent attacks there and the oil giant's potential criminal liability, Fegalo Nsuke of the Movement for the Survival of the Ogoni People told Radio Sputnik.

Shell should be subject to a criminal investigation into its potential complicity in human rights abuses committed by Nigerian security forces against opponents of oil extraction, Amnesty International wrote in a report published on Tuesday.

The NGO alleges that Shell knew about and encouraged the violent campaign against activists in Ogoniland, who forced Shell to stop operations there in 1993 amid complaints about environmental pollution. The Nigerian security forces' subsequently carried out attacks including the unlawful killing of hundreds of Ogonis, torture, rape and the destruction of homes and livelihoods.

Shell’s Nigeria Hell: Amnesty Links Oil Giant to 90s 'Rape, Torture, Murder'
Fegalo Nsuke, Publicity Secretary of the Movement for the Survival of the Ogoni People, told Radio Sputnik that he believes justice will eventually be served for the people of Ogoniland.

Sputnik: What is your take on the report published by Amnesty International?

Fegalo Nsuke: I think the report published by Amnesty International is very correct. Shell has been involved in lots of crimes which took place in the Ogoni area and in fact, some of the evidence that Amnesty presented is minimal, compared to the atrocities that Shell has done.

I'll give you one case, which has not been very well-reported. It was the case of an army major who visited one of the Ogoni communities and met with most of the activists. He shot a man into pieces with his gun. This army major was working to protect Shell's interests in Ogoniland.

Sputnik: It's been more than 20 years since the events in Ogoniland. Why has it taken so long, before Amnesty's call to open the investigation?

Fegalo Nsuke: It doesn't really matter how long it takes. What counts is that we are able to get justice at the end of the day. Nigeria, as a country, protects Shell and it will shock you to know that Nigeria has not instituted a report into Shell's activities in Ogoniland. Nigeria has not brought Shell to account for its actions in Ogoniland, not one single case.

So, for us, we know that the Nigerian government is not ready to pursue Shell for what happened in Ogoniland, and so we commend Amnesty International for these actions, even if it has taken this long. 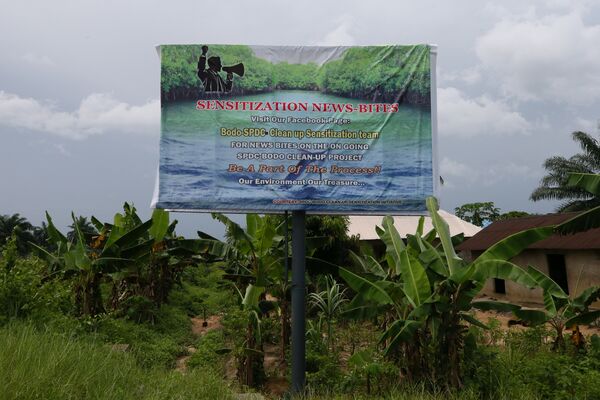 A signboard announces the clean-up by Shell-SPDC in Bodo Rivers State, Nigeria November 1, 2017
© REUTERS / Afolabi Sotunde
Sputnik: You say that the Nigerian government has not once brought Shell to account. Do you expect a criminal case to be opened against Shell this time? What could its outcome be?

Sputnik: Why hasn't justice been served for the Ogoni people, including [executed MOSOP leader Ken] Saro-Wiwa?

Fegalo Nsuke: Nigeria is a highly tribalized country. The resources that power the Nigerian government essentially come from [areas of] the minorities like the Ogoni. So, you find that the government is dominated by the larger ethnic groups, whose resources are not enough to run the government.

So, I can say that the government is actually slowing down [the legal process]. The laws in Nigeria, again, are also discriminatory, the laws don't give room for people to find justice for the Ogoni people, to find justice within Nigeria. That's essentially the problem.

Shell Taken to Court Over Complicity in 1995 Execution of 9 Nigerians
Sputnik: You are publicity secretary for the Movement for the Survival of the Ogoni People (MOSOP). Could you please tell us what your group has been doing to render justice and what else are you planning to do? You just said there are not enough resources, so I'm sure your work is very difficult.

Fegalo Nsuke: At the moment, we are essentially mobilizing our people to continue to stand against, to resist Shell's attempt to raise production in Ogoniland. We are telling the government that there has to be a dialogue. There has to be a negotiator involved in this whole thing, so we can reach an agreement and we can say OK, this is where we stand. That is the situation right now.

Sputnik: Why do you think this report has come out just now, and who do you see benefitting from it, when it comes to the fight for resources and in light of the global market?

Fegalo Nsuke: I would say that who benefits from this report, depends on where it goes. For the Ogoni people, we are insisting there is a distinct ethnic group in Nigeria that makes a significant contribution to Nigeria's economy. We are asking Nigeria to respect our political rights to self-determination, because we feel that if Nigeria respects our right to self-determination, we can [solve] a whole lot of problems, including the problems of our environment.

So, I think it depends on where or how the Nigerian government takes the request to respect our rights and treat us, the Ogoni people, with some dignity. Essentially, we want to function within Nigeria, as Ogoni people.