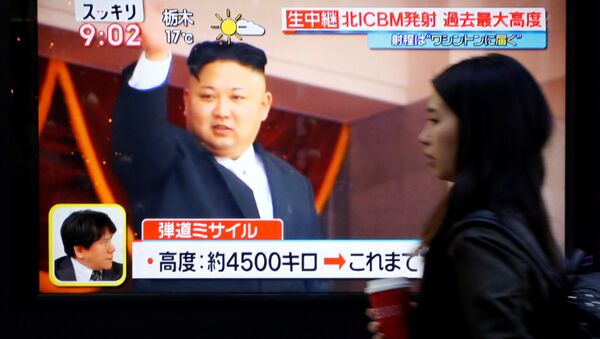 Earlier in the day, Pyongyang confirmed it had tested the Hwasong-15 ballistic missile, which is capable of reaching targets throughout the United States.

The North Korean Embassy in Moscow stated that North Korea's Hwasong-15 ballistic missile is "equipped with a system of weapons capable of loading an extremely large heavy nuclear warhead and striking the entire mainland part of the United States."

Japanese Defense Minister Itsunori Onodera told reporters that the missile flew about 1,000 kilometers (some 621 miles), causing no damage while falling into the Sea of Japan. According to Onodera, Japan believes the missile could have reached an altitude of over 4,000 kilometers.

​The situation on the Korean Peninsula has been escalating since the beginning of the year due to Pyongyang's missile and nuclear tests, all conducted in violation of United Nations Security Council (UNSC) resolutions.