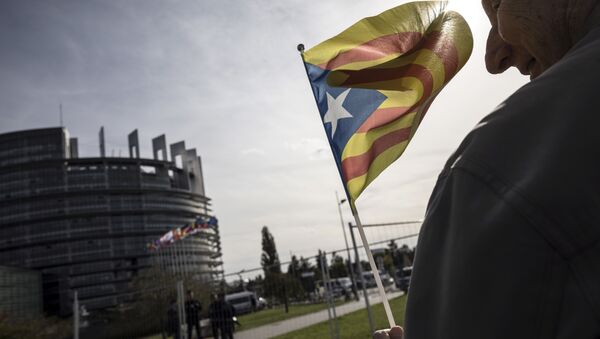 The words 'President Puigdemont' have been banned from Catalan public media, on the grounds that they defy the principle of informational neutrality. Sputnik spoke to Josep Costa, professor of Political Theory at the University of Pompeu Fabra, about what’s happening in Catalonia as the election draws closer.

Sputnik: What kind of censorship has been seen by Catalan media platforms since the application of Article 155?

Josep Costa: There was an idea that the central government might take over the control of the Catalan public media. In the end, they did not decide to exclusively take over, and as far as private media is concerned, nothing has changed. The only real thing is this sort of 'extreme control' that government-owned radio and TV are being subject to from the opposition, the pro-Spanish groups that are using the electoral petition to tell people what to do.

They seem to be particularly concerned about the coverage of the former ministers, the government, and the president who were sacked, and forced out of office through article 155. They have been trying to reduce coverage of this in the public media, or at least to change the narrative of that coverage.

Sputnik: They have now banned the words 'President Puigdemont', as he is no longer president. Do you consider this to be censorship?

Catalonia Vows to Appeal Invoking of Article 155 in Constitutional Court
Josep Costa: On the banning of the phrase 'President Puigdemont', there is something peculiar about this, as Catalan presidents are referred to as such even after they have left office. Whether he is the president now or not, he is entitled to be called 'the president', or 'President Puigdemont', as former presidents are referred to in the same way. There's a lack of consideration here for the Catalan public culture, because to refer to former presidents under the name 'President', is a common tradition that happens in other countries as well.

Sputnik: What about the petition released asking for the color 'yellow' to be banned from the electoral campaign?

Sputnik: Is there anything that you feel that international media is failing to report on?

Brussels Prosecutor Demands Extradition of Puigdemont to Spain - Reports
Josep Costa: People feel that this is a really crucial election. The turn-out will be huge and the stakes are very high. There is a lot of questioning as to whether this will be a free and fair election because the Spanish government, and media are not abiding by the rules of neutrality and impartiality. There seems to be a media storm, or government push, for a vote against independence, or for pro-independence parties. The stakes are so high it will not be a fair and balanced coverage of the election by the media. I don't know to what extent that is apparent to everyone, they tend to focus on the Catalan media as biased, in favor of independence. We need to take into consideration, however, that the Catalan public media enjoy a very limited share of the audience. The vast majority of media that is watched or listened to in Catalonia, is Spanish media, and they are pushing very hard against independence. We sort of fear that it is not a balanced field ahead of the election.