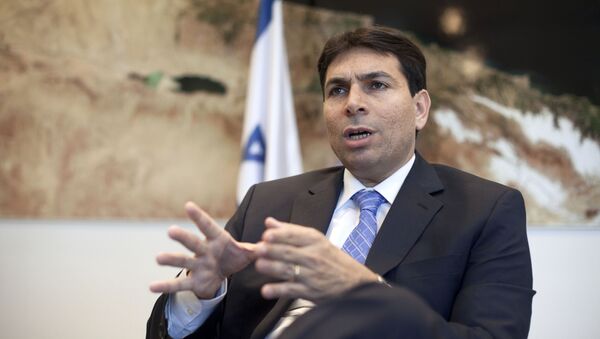 Although just two members of the Arab League have official diplomatic ties with Israel, there are a dozen Arab states which have a secretive relationship with Tel Aviv and "understand the potential of relations with Israel" in spite of their official position on the country's existence, Israeli Ambassador to the United Nations Danny Danon has said.

"They still do not vote with us, but I can say that we have a relationship with them," Danon said.

Netanyahu Hails Israeli Cooperation With Arab States That is 'in General Secret'
Danon, who was appointed ambassador to the UN in October 2015, said that some Arab ambassadors used to cross to the other side of the corridor when they saw him at UN headquarters, but today they greet each other, shake hands and discuss collaboration.

"We are talking about a dozen Islamic countries, including Arab countries that understand the potential of relations with Israel," he explained.

"We collaborate with them on a weekly basis. The State of Israel is not the regional problem, it is the regional solution, so we are strengthening this cooperation," Danon said.

'They Both Hate Iran': Why Israel and Saudi Arabia Are Getting Very Cozy
Earlier this month, Israeli Energy Minister Yuval Steinitz revealed for the first time that Tel Aviv has covert contact with Saudi Arabia. He said that the countries have some shared interests, including opposition to Iran.

"Contacts with the moderate Arab world, including with Saudi Arabia, help us deter Iran… We have ties, which are partially secret, with many Muslim and Arab states… As a rule, the opposite side is interested in keeping these ties in secret," Steinitz told Israeli Army Radio on November 19.

Only two members of the 22-member Arab League officially have diplomatic relations with Israeli: they are neighboring Egypt and Jordan. The former established diplomatic relations after signing a 1979 peace treaty, the latter signed a peace treaty with Israel in 1994. A further ten members of the Organization of Islamic Cooperation also do not recognize the state of Israel, which was proclaimed on May 14, 1948.