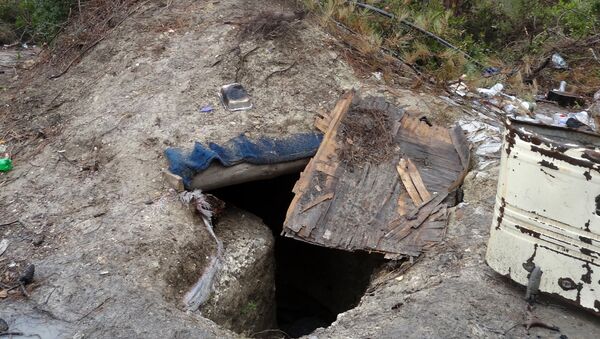 © Sputnik
Subscribe
Amid ongoing efforts to liberate the region from Daesh (ISIS), the Iraqi Army has discovered new details about how the terrorists operated, including their logistical infrastructure in stolen oil.

An exclusive video obtained by Sputnik shows secret underground repositories of black gold, which the terrorists were presumably forced to create to hide their stolen wealth from the anti-terrorist coalition.

The video reveals oil tanks with a capacity of several thousand metric tons dug several feet into the ground. In these makeshift underground shelters, the oil repositories would go unnoticed by the Iraqi military and reconnaissance aircraft.

Since 2015, Daesh's wealth in stolen natural resources in Syria and Iraq has been decimated, particularly following a concentrated campaign begun by Russian and Syrian air power to destroy smuggled oil heading for the Turkish border. In November 2015, the Russian Aerospace Forces launched a major concentrated attack targeting oil tankers, destroying an estimated 1,000 oil tankers, as well as oil refineries and oil storage facilities in a five day campaign in northern and eastern Syria. The US-led coalition reported destroying another 280+ tankers later that month, with both sides launching further strikes.

Destruction of a terrorist-held oil refinery in Deri Ez-Zor province.

Harrowing VIDEO Captures Deadly Duel Between Iraqi Tank, 'Jihadimobile'
Following a series of Syrian, Russian, and US-led attacks, terrorists from Daesh (ISIS) were forced to change their tactics, switching to the use of small, hidden, makeshift refineries and storage facilities. In 2016, US analysts estimated that the terrorists were making about $20 million a month from the stolen oil, down from as much as $3 million per day in 2014.

Daesh is now on the verge of defeat in both Syria and Iraq, its influence reduced dramatically amid separate major Syrian and Iraqi offensives to free their countries from the terrorists. Last week, Syrian forces announced that a patch of territory along the west bank of the Euphrates River is now the only area in Syria where the terrorist group remains operational.

000000
Popular comments
Cant believe they stored all the oil this caveman method, including the ones they traded for years with corrupt erdogans family son for lots $. Sounds abit too much like the fable of bin laden in his cave etc.

Kate17
28 November 2017, 13:02 GMT
000000
Looks like the janitors hideout in 'Die hard 2' though it was the Germans hijacking the airport in that film. Also to be fair the janitor did very little in the way of beheading barring nearly getting Bruce Willis character decapitated with his directions. Edit-: It was a similar story for footballer Santi Carzola (Legend) of Arsenal FC, he needed a skin graft for the surgery and lost part of his tattoo.