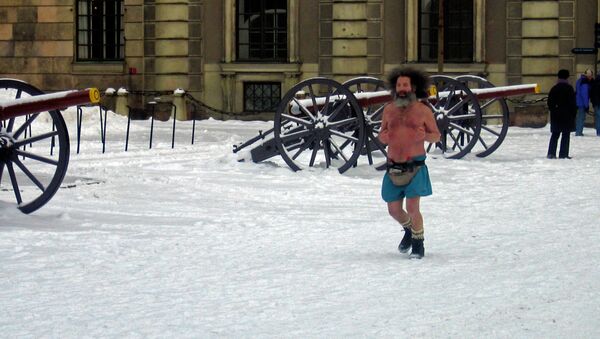 CC BY-SA 2.0 / Sean Biehle / Warming Up
Subscribe
A Swedish town has introduced jogging policemen to help sporty citizens feel safe while running in the community in the evening. After the story became international news, Sweden defended the initiative, claiming it was misused to portray the Nordic country as unsafe due to immigration.

Earlier this month, police is Oskarshamn, Kalmar County (population 18,000) announced they would take part in the evening jogging rounds to boost the feeling of security among locals.

Joggers, who have come to feel more and more insecure after dark, will thus be able to share the company of police officers equipped with weapons, batons and handcuffs. A special vest has been developed to make it easier to keep pace with the joggers.

"We have heard a number of times that women feel a general [sense of] insecurity when they are out in the evening," police inspector Peter Karlsson told the local Östra Småland newspaper, adding that the initiative will be implemented outside of regular police working hours.

In Swedish No-Go Zones, Microphones Will Hear You Scream
The idea was supported by Oskarshamn Municipality and Sweden's Crime Prevention Council (Brå). Even the town's rescue service said it might join the jogging rounds.

Peter Karlsson noted that people in Oskarshamn feel increasingly unsafe when it's dark outside, but argued that real crime is probably not as common as some people think.

"There is a perceived insecurity more than a real one. Not much happens here, but people are affected by what is happening elsewhere in the world and can feel unsafe when it's dark," Karlsson told national broadcaster SVT.

The first 'trial run' would include three police jogs.

However, the story came into the international limelight after former UKIP leader Nigel Farage spoke on the initiative on radio station LBC.

"Who would have believed I would have said that about a Swedish city just five years ago? It is truly incredible," Farage was quoted as saying.

Residents of Oskarshamn in Sweden will now be accompanied by armed police officers while out jogging. How did Europe let this happen? pic.twitter.com/oGwauhys6r

"This is the small price you pay for multiculturalism," said Lega Nord leader Umberto Bossi.

"You don't really know whether to laugh or to cry. Unfortunately, there are always people who interpret things to suit their own agenda," Pleijel said, arguing that the measure was simply aimed at increasing the sense of security of the community.

Peter Karlsson, the man behind the initiative, was appalled by the insinuations.

"It's absolutely horrible. It has nothing to do with immigration — why we started this safety jog," Karlsson told Swedish Radio. "It's not that we are overtaken by crimes here in Oskarshamn," he added, adding that everything could be used for propaganda purposes.

Meanwhile, a security report compiled by Brå indicated a rising feeling of insecurity among Swedes. About half of respondents in south Malmö and Botkyrka, both previously listed as vulnerable areas by the Swedish police, said they were afraid to go out in the evening. However, the relatively calm town of Ystad, surprisingly, led the "anxiety poll" with 58 percent, SVT reported.

000000
Popular comments
Back in the 1970's and 1980's, the place to go if you were a mugger was Central Park in NYC. The cops got fed up with it and organized their own team of jogger "bait" for the muggers who were basically police who liked to tangle as well as jog done up like Mad Max with a weapon concealed in every available hiding place on their person plus response teams in vehicles at a distance with binoculars to descend on the inevitable fray the moment it kicked off. It took about 3 months to sort Central Park out until the muggers' lawyers started shouting "Entrapment!" It is not healthy that the old-school Tom & Jerry cartoons are banned for the most part from being broadcast on TV. Sadly that is how the real world works. That was the whole point of making the cartoons in the first place.