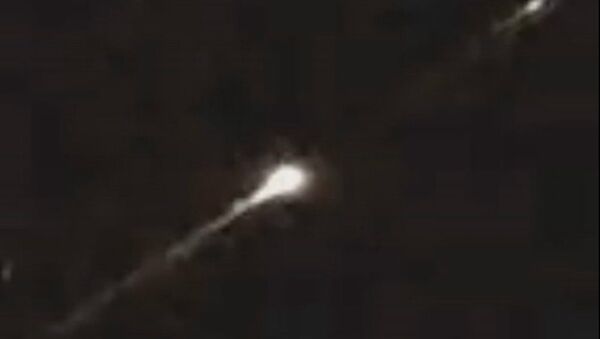 © Photo : Youtube / theverge
Subscribe
Amid a whole lot of speculations over what the intriguing streaks of fire in the Canadian sky actually were, the truth appears to have come to light.

The spectacular illumination seen over a rural Canadian  area late Friday had more likely to do with a rocket booster re-entering the Earth’s atmosphere after it took the spacecraft to the International Space Station, as reported by CBC.

A day later, The American Meteor Society officially reported 11 sightings and the videos of the intriguing illumination promptly sparked speculation over whether it was a helicopter, or alternatively a comet or, even aliens.

However, Eric Briggs, a volunteer with the Royal Astronomic Society of Canada, said it was more likely the re-entry of a rocket part.
"I'd expect to see something flying from west to east, faster than an aircraft at high altitude with a trail following behind it and it appearing to break up into pieces," said Briggs, who witnessed the re-entry of a Russian spacecraft component from the Dunlap Observatory in Richmond Hill, Ontario, about 13 years ago.
Briggs, like other North American enthusiasts, has pieced together the bright light seen on the prairies with the timing and location of the movement of the Antares rocket, propelling the Cygnus spacecraft to the International Space Station. The US Strategic Command and the Orbital ATK, which produced the Antares, confirmed the supposition, CBC reported:

​On Friday night, western Canada witnessed a slowly moving streak of fire, illuminating the sky over Saskatchewan and Alberta, which made residents feel both surprised and scared. Residents said the "fireball" was visible for around 20 seconds.

The video, made at almost midnight local time in the George Gordon First Nation area in Saskatchewan, now boasts a staggering 35,000 viewings.

READ MORE:Mysterious ISS Footage: Are Space Agencies Hiding Proof of Alien Life? (VIDEO)
Newsfeed
0
New firstOld first
loader
LIVE
Заголовок открываемого материала
Access to the chat has been blocked for violating the rules . You will be able to participate again through:∞. If you do not agree with the blocking, please use the feedback form
The discussion is closed. You can participate in the discussion within 24 hours after the publication of the article.
To participate in the discussion
log in or register
loader
Chats
Заголовок открываемого материала
Worldwide
InternationalEnglishEnglishMundoEspañolSpanish
Europe
DeutschlandDeutschGermanFranceFrançaisFrenchΕλλάδαΕλληνικάGreekItaliaItalianoItalianČeská republikaČeštinaCzechPolskaPolskiPolishСрбиjаСрпскиSerbianLatvijaLatviešuLatvianLietuvaLietuviųLithuanianMoldovaMoldoveneascăMoldavianБеларусьБеларускiBelarusian
Transcaucasia
ԱրմենիաՀայերենArmenianАҧсныАҧсышәалаAbkhazХуссар ИрыстонИронауОssetianსაქართველოქართულიGeorgianAzərbaycanАzərbaycancaAzerbaijani
Middle East
Sputnik عربيArabicArabicTürkiyeTürkçeTurkishSputnik ایرانPersianPersianSputnik افغانستانDariDari
Central Asia
ҚазақстанҚазақ тіліKazakhКыргызстанКыргызчаKyrgyzOʻzbekistonЎзбекчаUzbekТоҷикистонТоҷикӣTajik
East & Southeast Asia
Việt NamTiếng ViệtVietnamese日本日本語Japanese中国中文Chinese
South America
BrasilPortuguêsPortuguese