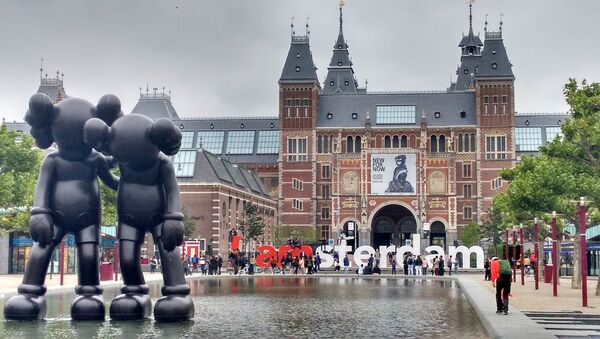 The painting was given to the institute by a woman whose father accidently purchased it at a stamp and coin market.

Representatives of the NIOD Institute for War, Holocaust and Genocide Studies said on Saturday that they donated a rare aquarelle by Adolf Hitler earlier this year, according to De Volkskrant newspaper.

"After months of following an authentication process the… conclusion is: it's an original from the hand of Adolf Hitler," the NIOD said in a statement.

The aquarelle is assumed to be the only one of its kind existing in the Netherlands.

​The donation was reportedly made by a woman who preferred to stay anonymous.

The painting, depicting a tower in Vienna, was purchased by her father at a stamp and coin market "for 75 cents." The man didn't know that the aquarelle belonged to the Nazi leader until he came home and discovered Hitler's signature on the painting.

The family reportedly tried to auction the aquarelle, as they didn't want to keep it, but two Dutch auction houses denied the painting.

After unsuccessful attempts to sell the artwork, the family donated it to the NIOD.

German Court Decides on Fate of Policeman Showing Hitler Salute in Public
According to the institute, a young Hitler earned his living by painting postcards and selling them in the 1910s. The Nazi leader is said to have made about 2,000 to 3,000 cards of which around 800 presumably exist today.

The institute's director, Frank van Vree, said that by accepting the Nazi era painting, the NIOD has prevented it from being sold to the public.

The Nazi occupation of the Netherlands was a terrifying time for Dutch residents, many of whom were persecuted, with over 100,000 Jews living in the Netherlands sent to death camps from which they never returned.