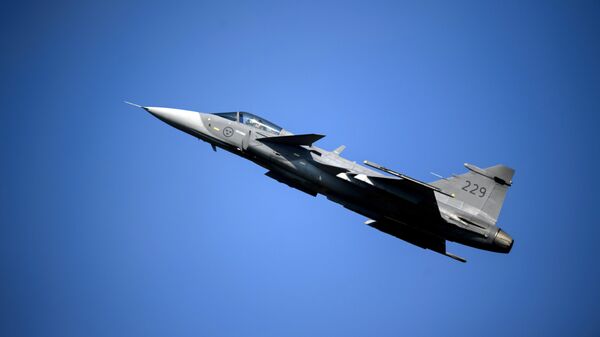 Rishikesh Kumar
All materialsWrite to the author
The Indian Government wants to widen the scope for competition among global players by removing the “single engine” criteria to avert a controversy as only two manufacturers have so far expressed interest in the tender.

New Delhi (Sputnik) — India might do away with the engine criteria for the planned purchase of over a hundred fighter jets for its air force, widening the scope of competition among foreign vendors supplying both single-engine as well as double-engine fighter crafts.

Highly placed sources told Sputnik that India's defense ministry wants an open fighter jet contest like the earlier deal for medium multi-role combat aircraft wherein the main criteria would be the technical capabilities of the jet not the number of engines. The new development has come as a rude awakening to American Lockheed Martin and Swedish Saab who were keenly anticipating a tender specifically for single engine fighter jets making the F-16 and Gripen the front-runners in the $10 billion deal.

Questions Arise as US-India F-16 Deal Seeks to Get Airborne
Last year in October, the Indian defense ministry had sent letters via Indian embassies to global manufacturers asking them whether they would set up a production line in India for a fleet of single-engine fighter jets in partnership with Indian firms. Responses were received from Lockheed Martin and Saab which offered to set up production lines in India for manufacturing the F-16 and Gripen respectively Now that the scope for twin-engine fighter jets is likely to be accommodated, the contract will witness a larger contest where twin-engine jets like the MiG-35, F-18 and Rafale could also participate.

"The government has not started any formal process for the proposed jet deal…not even finalized the request for information. The Indian Air Force always wanted a more capable fighter jet and if the government does away with the number of engine criteria then definitely twin-engine manufacturers will have the upper hand," Amit Cowshish, former financial advisor to the Indian defense ministry told Sputnik.

"The Gripen and F-16 were not able to pass the technical criteria set out by the Indian Air Force in the 2007 MMRCA contest, this time they have likely to come up with better preparation to beat the technical parameters," Cowshish added.

Nevertheless, these developments have definitely dealt a blow to single-engine jet manufacturers that have already linked up with Indian partners and have even started deliberations with suppliers. Swedish defense and security firm Saab has linked up with India's Adani Group — a new entrant in the field of defense aerospace, while in June of this year, Lockheed Martin from the US had intended to join hands with India's Tata Advanced System to produce the F-16 Block 70 in India.

"The open competition without mentioning the number of engines may be the end of the road for single-engine jet makers as they are unlikely to compete with twin-engine jets," Cowshish said.

"Right now, we are concentrating on the single-engine so as to make up the numbers with lower cost. There is a requirement for twin-engine fighters down the road, but engines are "30% of the cost" of a twin, versus 10% of a single," Dhanoa had said.