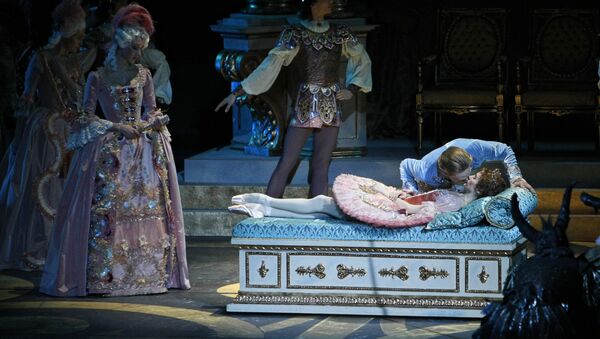 © AP Photo / Alexander Zemlianichenko
Subscribe
Sarah Hall, a woman from Newcastle, England, is demanding that the fairy tale “Sleeping Beauty” be removed from her six-year-old son’s school program, because she believes the book promotes an “inappropriate sexual” message.

The centuries-old folktale, in which a prince wakes a princess from an induced 100-year sleep by a kiss, teaches children the wrong thing about consent, Hall says.

"I think it's a specific issue in the ‘Sleeping Beauty' story about sexual behavior and consent," she told the Newcastle Chronicle. "It's about saying ‘Is this still relevant, is it appropriate?'"

"My son is only six, he absorbs everything he sees, and it isn't as if I can turn it into a constructive conversation," she said.

"I don't think taking ‘Sleeping Beauty' books out of circulation completely would be right. I actually think it would be a great resource for older children, you could have a conversation around it, you could talk about consent, and how the princess might feel," she added, according to the International Business Times.

Speaking to journalists, Hall said she was inspired to take action by the recent pandemic of sexual scandals among celebrities and officials around the world.

In taking her discussion of the fairy tale online, Hall used the #MeToo hashtag, which has served as the rallying cry for people to share their private experiences of sexual harassment. (Her position, unsurprisingly, has generated a great deal of pushback, as well as support, on social media.)

You’re an absolute inspiration. It’s all about teaching our little men not to objectify women, from boyhood to beyond #metoo #mysonisfourteen

What about people thinking it’s ok to use someone’s hair as a rope? Surely that’s not right consensual or otherwise #Rapunzelmustgo

Yes exactly! How can we expect to be taken seriously when women like Sarah come out with ridiculous statements like this?? And piggybacking off the Me Too hashtag is just insulting.

​​For the uninitiated, the plot of "Sleeping Beauty" goes as follows: an evil sorceress curses a newborn princess to die after she pricks her finger on a spindle at the age of 16; however, a group of good fairies manage to partially reverse the spell so that the princess, instead of dying, falls asleep for 100 years. The only thing that can awake her from her magic sleep is a kiss from a prince.

Hall, who runs a public relations consultancy, did not elaborate on whether the prince should have left the princess in her induced coma for a century, since a king's son's kiss was basically the condition for a princess to wake up.

000000
Popular comments
The mum did not understand anything about Sleeping Beauty... The Prince did not kissed the princess, he kissed her beauty as told in the book. That is also how kids understand the story. Simply putting a sexually meaning in an innocent and pure child's mind is a crime by itself. The logic the mum implies is not to help anyone... Maybe if the princess were top be kissed by another princess would make things better??? Should the Prince let Sleeping Beauty sleeps forever? so they can never be happy forever after....