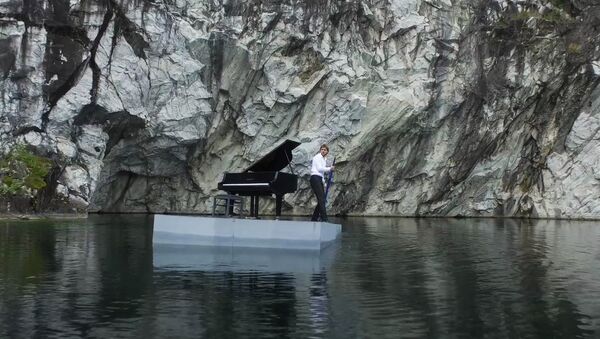 © Photo : Pavel Andreev
Subscribe
Pavel Andreev, a musician from Saint Petersburg, Russia, told Sputnik about his splendid grand piano performance in the middle of a picturesque lake surrounded by spectacular Ruskeala, a mountain park in Karelia.

Regina Konstantinova — In an attempt to share his experience of unconditional unity with nature and art, Petersburg-based pianist Pavel Andreev launched an unusual project called "A grand piano in a canyon."

The enthusiast played his own composition, "Awakening," in a former marble quarry filled with crystal clear groundwater in Ruskeala Park and recorded it on camera. The clip, which was published on YouTube in early November, gave thousands of viewers the goosebumps as they watched his magical performance.

"The idea to perform music in Ruskeala first came to me in 2013, when I was rowing a boat along the canyon," the musician told Sputnik. "Acoustics, the beauty of nature… I could literally hear how great the music would sound in this place. But this thought remained an unembodied dream until the spring of 2017, when thanks to my wife and my muse Oksana, we took the first step towards its realization," he explained. 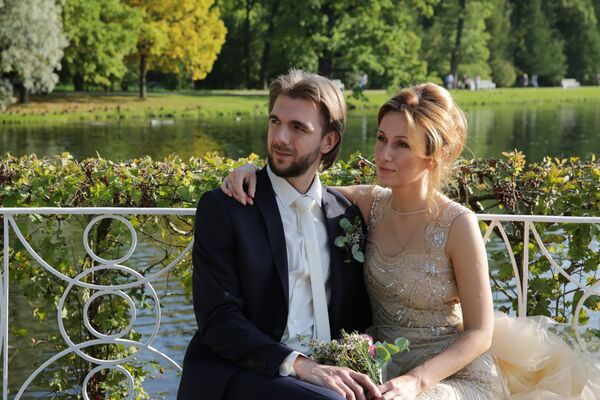 Pavel Andreev and his wife Oksana
© Photo : Pavel Andreev
According to Andreev, the preparations took him about three months. The shooting started in August. "We started every shooting day with the larks, usually about 5 a.m.," the pianist said.

Despite Ruskeala being usually filled with crowds of tourists, you won't see any other people in the video, except Pavel. "There were many moments when tourists got into the frame, riding on boats or suddenly appearing on the top of a hill. These snaps were not included in the final clip, because it was actually about intimate unity with nature, with creativity, with yourself," he noted.

The project came to life, thanks to countless "soulmates" who raised money on the Planeta.ru crowdfunding campaign and a whole team of stevedores, drivers, assistants, cameramen and film editors. "My friends from Karelia Alexey and Vitaly helped with the construction of the raft and transportation of pontoons and piano," Andreev admitted. "I can't express how grateful I am to everyone who supported us — only together, united by the same idea, we were able to achieve this result!" he continued. 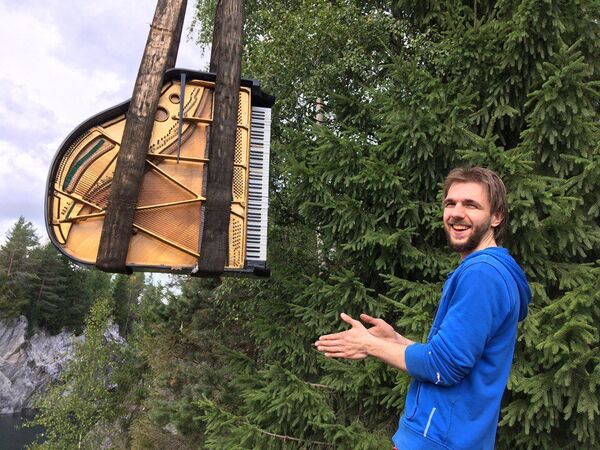 Pavel Andreev is seen here during the installation of a grand piano on pontoons at the Marble Canyon in Ruskeala, Karelia, Russia.
© Photo : Pavel Andreev
According to Pavel, music has become an essential part of his life since he was just 4. Besides composing and playing his own music, he gives piano lessons to those who want to get acquainted with this beautiful world of art.

"Currently, I am in the process of preparing for several concerts. I am also a coach, helping other musicians achieve success, freedom and real musical sense," Andreev said.

One day, the musician hopes to give a live grand piano concert in the canyon. Talking about his future plans, Pavel also noted he would like to continue playing the piano in unusual places.

In 2016, in conjunction with Greenpeace, acclaimed Italian composer Ludovico Einaudi gave a magnificent performance among Norwegian icebergs of the Arctic, demanding protection for the region.

Another breathtaking music event took place in Crimea's Marble Cave in August 2017, where a chamber orchestra performed classics in front of 150 viewers at a depth of 40 meters.