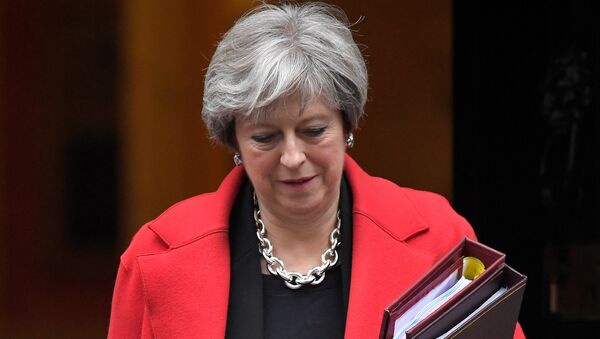 © REUTERS / Toby Melville
Subscribe
British prime minister Theresa May could have been thrown an unexpected lifeline in the Brexit negotiations with the Republic of Ireland on the verge of a snap election, or it could finally signal the end of her government, according to conflicting views by two leading UK political analysts.

News that Ireland may go to the polls next month — possibly on Friday, December 15, the day scheduled talks are due to take place between the UK and the European Union — may play straight into Britain's hands while another believes it may result in the collapse of UK PM May's government.

Fianna Fail, the Irish Republican Party, tabled a motion of no confidence in Tanaiste Frances Fitzgerald on Friday, November 24, although party leader Micheal Martin has hinted it could be withdrawn if the minister resigns.

A general election now looms as Taoiseach Leo Varadkar has rejected demands to remove her, leaving senior government figures toying with the idea of holding a general election — possibly on the same day as the crucial summit that will decide if Brexit negotiations should proceed to the next phase.

Fianna Fail, the party, which props up the country's minority coalition government is keen that an election be held as soon as possible, a view supported also by liberal-conservative and Christian democratic Fine Gael party.

Political commentator Peter Stefanovic said the prospect of the Irish people hitting the ballot boxes could help the British cause.

"An election couldn't come at a worst possible time for Ireland since it essentially holds a veto over whether Brexit talks progress to the next stage between the UK and the EU," said Mr. Stefanovic.

"The EU has always backed Dublin, saying we must first conclude talks on the status of EU citizens in Britain, the Irish border and of course the divorce bill before we can make any progress with trade negotiations. I can therefore see Theresa May relishing this unfortunate turn of events," he added.

Opposing views have, however, been expressed by Adam Garrie, a political analyst and managing editor of TheDuran, who said it could sound the death knell for the British premier.

"If a new Irish parliament takes an even firmer line on an open internal Irish border, it would strain the EU-UK talks even further. Ireland is dead set against the re-imposition of border controls and this worry has been made even more magnified now that the only reason May's government still exists is due to the extremist DUP [Democratic Unionist Party] sitting beside the Conservative Party," Mr. Garrie said.

"If the Irish issues concerning the border become an issue, and if it comes to the point that the DUP withdraws support for the UK government over May trying to placate the position of moderates in Northern Ireland, republicans in Northern Ireland and a new government in Dublin, this could finally take down the May government," Mr. Garrie told Sputnik.

No Border Deal, No Trade Talks

Their comments come a week after the Irish Taoiseach Leo Varadkar insisted the EU was willing to delay beginning discussions on any future trade deal after Brexit unless a satisfactory agreement was reached over the Irish border question — one of the main stumbling blocks during early discussions.

Speaking in Gothenburg, Sweden, on Friday, November 17, he warned Dublin was firmly opposed to the start of a trading relationship until Mrs. May provided assurances about the post-Brexit border with Northern Ireland.

Before meeting with the British premier, Mr. Varadkar demanded written assurances from London over this key issue.

"What we want to take off the table before we even talk about trade is any idea that there would be a hard border, physical border or a border resembling the past in Ireland."

A Downing Street spokesperson said afterwards that discussions had been "constructive."

No-one wants a hard border so why does @campaignforleo imply it is British Government’s responsibility. @DavidDavisMP won’t be putting up barriers at border so will the Irish Government? Taoiseach should tell @EU_Commission to stop playing games and begin serious talks

​"On Northern Ireland, the PM was clear that the Belfast agreement must be at the heart of our approach and that Northern Ireland's unique circumstances demand specific solutions. The PM said it was important to protect progress made in Northern Ireland over recent years," he said.

Before meeting with the British premier, Mr. Varadkar demanded written assurances from London over this key issue.

"What we want to take off the table before we even talk about trade is any idea that there would be a hard border, physical border or a border resembling the past in Ireland."

A Downing Street spokesperson said afterwards that discussions had been "constructive."

"On Northern Ireland, the PM was clear that the Belfast agreement must be at the heart of our approach and that Northern Ireland's unique circumstances demand specific solutions. The PM said it was important to protect progress made in Northern Ireland over recent years," he said.

The prospect of a Christmas general election emerged following a row about emails from the deputy prime minister into how police deal with a whistleblower alleging corruption and malpractice.

It centers around an email from May 2015, which outlined how legal teams from Noirin O'Sullivan, the then police commissioner, and Maurice McCabe, a police officer, clashed at an inquiry over allegations of police malpractice. The email related to a strategy Sgt. McCabe's supporters claim was drawn up to discredit him.

Regina Doherty is completely wrong, Frances Fitzgerald was told clearly in that email about the legal strategy that Nóirín O’Sullivan was pursuing. Alarm bells should have rung and she should have taken action. The purpose of the email was to alert her to the strategy. #todaysor

​Ms. Fitzgerald claims that she did not remember the email, and that, in any event, she could not have legally intervened. A judicial inquiry into the handling of the way the police officer was treated is presently taking place.

.@MaryLouMcDonald is raising "the malicious strategy, designed by former Garda Commissioner Nóirín O’Sullivan and her legal team, to destroy the reputation and the life of Sgt Maurice McCabe" in the #dail pic.twitter.com/nEkXvXc1bg

​While the deputy prime minister has the backing of her own party Fine Gael, it relies on the goodwill of the main opposition party Fianna Fail to remain in power.

Fianna Fail operates a policy similar to the Democratic Unionists at Westminster in a so-called "confidence and supply" strategy. It has, however, hinted this arrangement is now dead in the water unless Ms. Fitzgerald resigns.