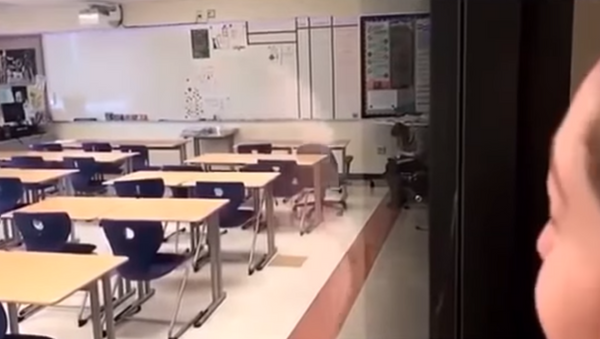 © Screenshot/GoalieSave25
Subscribe
She probably would've gotten away with it if it wasn't for those meddling kids.

Samantha Cox, a teacher at Indiana's Lake Central High School, was arrested and hit with drug-related charges Wednesday after her students filmed her allegedly snorting cocaine in an empty classroom.

​"She tried to hide herself," John Rogers, the student who filmed the incident, told CBS Chicago. "She wasn't at her desk where we could see her. She was all the way in the corner where she thought we can't see her."

Rogers's video shows the teacher sitting in a corner of her classroom and appearing to draw lines of cocaine on a textbook before ultimately snorting the substance.

​Concerned, students contacted their administrators who then brought in officials from the St. John Police Department at roughly 11:30 a.m. local time. A drug-sniffing dog was later brought on the scene after St. John PD requested extra resources from the Dyer Police Department.

By 1 p.m. Wednesday, the 24-year-old English instructor was in handcuffs and removed from the school after a "mixture of cocaine and heroin" was found in her possession. She is currently facing a felony drug possession and a misdemeanor paraphernalia charge, the CBS station reported.

"It is a serious thing," Michael Sanchez, another student from the Indiana school, told reporters. "A lot of people can get addicted to a lot of things, and something like this is… it's very heart-breaking."

Following the arrest, James Kveton, police chief for the St. John department, said in a statement that the students showed "a tremendous amount of fortitude and integrity" by alerting officials.

Larry Veracco, the Lake Central superintendent, issued a roboball to parents informing them that police and school staff took "swift and forceful actions" to resolve the issue.

If found guilty, Cox could spend up to two and half years in prison, New York Daily News reported.

000000
Popular comments
this explaines why my teachers behaved the way they did :D