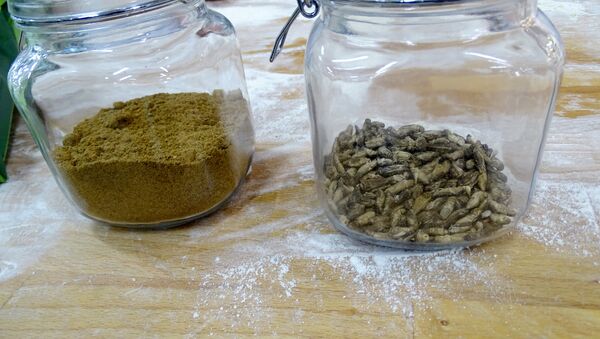 © REUTERS / Attila Cser
Subscribe
Finland's Fazer has become the first bakery in the world to launch insect bread. In celebration of the government granting permission to sell insects as food, Finnish companies have joined the gold rush to capitalize on edible creepy-crawlies.

After the sale of insect food was green-lit by the Finnish government on November 1, 2017, Fazer debuted hand-baked bug bread. Loafs containing 70 crickets each are available in eleven stores in Greater Helsinki starting from Friday.

"We wanted to be among the first to implement the food revolution. We want to grow within the bread category with our craft-baked artisan bread. At Fazer boutique bakeries, we can easily bake and test different new [products]. As the world's first insect bread, Fazer cricket bread is a good example of this," Fazer Bakery Finland managing director Markus Hellström told the Hufvudstadsbladet daily.

"The bug bread is a good source of protein. The insects are also rich in wholesome fatty acids, calcium, iron and vitamin B12," Fazer innovation director Juhani Sibakov said.

​"It doesn't taste like crickets," a flabbergasted consumer asked by the Helsingin Sanomat daily said. "It tastes like ordinary bread, and a really good [loaf] at that," he added.

In Fazer's footsteps, Finnish companies Kultasuklaa and Entis will launch the sale of crickets coated in chocolate under the "What the Bug" motto by Christmas.

​The Finnish firm EntoCube is one of the trail blazers of the burgeoning industry, having been growing and marketing insects for past three years, in addition to an awareness raising campaign. According to EntoCube, there is still a lot of work to be done, as the sheer prospect of consuming insects still puts off many Westerners, although 70 percent of Finns said they were interested in trying bug food in last year's poll.

New studies confirm #Finland may be the most #edibleinsects friendly country in the world, even topping S-E Asia. Wow! Change in 2 years. pic.twitter.com/kCiNGIQmeu

​At present, the company owns four container grow-rooms, which are able to produce about 70 kilograms of crickets over a 35-day cycle, and has immediate expansion plans.

Danish Hotels 'Bugging' Clientele With Sustainable Insect Breakfasts
Meanwhile, the upcoming wave of edible insects in the grocery stores is forecast to induce allergy problems, causing severe anaphylactic reactions among some people. For instance, people allergic to shrimp may find it wise to abstain from insect products as bug protein is similar to that found in shellfish.

To prevent this from happening, the Finnish Food Safety Authority Evira issued a 44-page manual calling on manufacturers to provide all food containing insects or traces thereof with warnings. The Finnish Allergy, Skin and Asthma Association also closely follows the spread of insects food over the market, Finnish national broadcaster Yle reported.

The reduced environmental footprint is a particular selling point of the bug diet. Some 15,400 liters of water are used to produce on kilogram of beef, compared with under 2,500 liters needed for one kilo rice. By contrast, producing one kilogram of crickets requires just a single liter of water, EntoCube CEO Perttu Karjalainen told Yle.

Need a tasty and sustainable snack? Visit @EntoCube booth to pick up some peanuts with crickets. #bhsummit #snacks #sustainablefood pic.twitter.com/lSLJOKQTW8