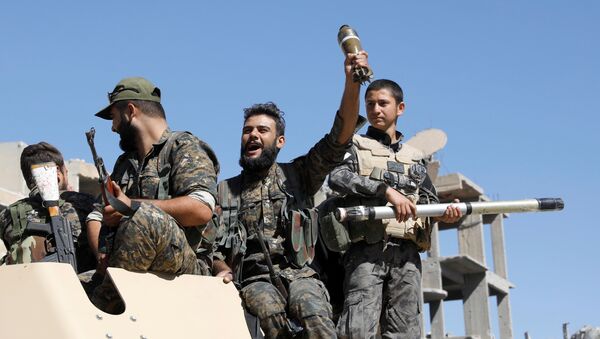 The prospect of peace in Syria appears to rely on Russia, Turkey and Iran working in cooperation to cultivate intra-Syrian dialogue, Ali Musawi, a war correspondent reporting from Beirut, told Sputnik Radio Wednesday.

"We've had Geneva I, Geneva II… So many other discussions between various other countries, but this is the most serious one we have seen," Musawi said. The most recent round of UN-led discussions was held over eight days from February 23 to March 3 of this year as part of the Geneva IV talks, but fighting has continued in war-torn Syria.

​Following two hours of discussions with Turkish President Recep Tayyip Erdogan and Iranian President Hassan Rouhani on Wednesday in Sochi, Russian President Vladimir Putin said "it is obvious that the reform process will not be simple, it will require compromise and concessions from all parties, including obviously the Syrian government."

"Indeed, militants in Syria have suffered a decisive blow, and now there is a real chance to end the civil war that has lasted many years," Putin added.

​On Tuesday, Putin held high-level talks with Syrian President Bashar al-Assad before discussing the prospects of peace in Syria with US President Donald Trump.

Putin said the Sochi meeting would be a "stimulus" for further peace discussions with the United Nations in Geneva, which have so far failed to bring the conflict in Syria to an end.

The latest dialogue between the heads of state is the most significant yet, Musawi told Loud & Clear. "Now we've seen that the Syrian government and its allies have pretty much controlled most of what was formerly Daesh's stronghold," Musawi said, making the prospects of a pending ceasefire seem more likely.

"The next phase after getting rid of the terrorists and extremists is to sit down with the opposition groups who understand what democracy is and what dialogue is," he said. Previous calls for Damascus to negotiate with the opposition have not resulted in much progress because "most of these groups were extremists who were hell-bent on destruction," Musawi added.

Still, it remains to be seen how opposition groups "will react to the attempts by Russia, Turkey and Iran to bring those parties together" in the advancement of a "peaceful settlement."

One of the "main parties" in negotiating what will happen to Syria's Idlib area is Turkey, which has troops there, he said. Thousands of fighters linked to al-Qaeda continue to occupy territory in Idlib, but the Turkish government has started warming up to the idea that Assad will stay in power there. Such a change represents a substantial shift away from Ankara's previous stance to remain allied with Saudi and US voices calling for Assad's ouster. According to him, Turkey will convince opposition groups not allied with the al-Nusra Front and al-Qaeda to enter negotiations with the Syrian government.

However, just because it seems unlikely that Saudi Arabia will be granted its wish of seeing Assad's removal, Riyadh "cannot be ignored" since it's still a regional player and exerts significant financial power over the region. Regarding Tuesday's conversation between Putin and Saudi Arabia's King Salman, the analyst said it was likely a signal that "Russia is now leading the charge to end the conflict in Syria."