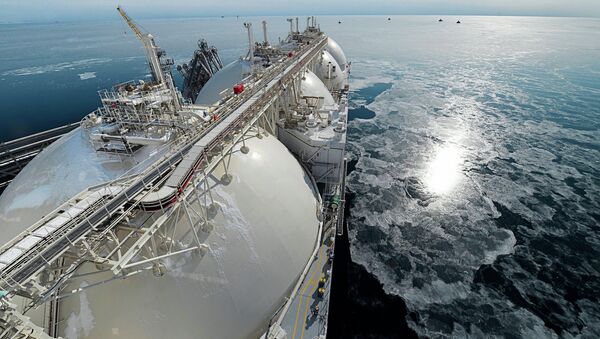 SANTA CRUZ DE LA SIERRA (Sputnik) — The Qatari Energy and Industry Minister forecasts demand to continue growing throughout the next decade and reach almost 500 million tons annually by 2030 due to gas replacing coal and nuclear power and development of power markets as well.

"While an oversupply appears over the next few years, it will not be to an extent as previously perceived. Supply of liquefied natural gas is expected to peak at 2020 and very few new LNG projects are expected to come in the earlier part of the next decade. As a result, the global LNG market will start to tighten, potentially facing a supply shortage by 2025 onward," Al Sada said, adding that LNG supply would reach 400 million tons annually by 2020.

Qatar to Back Russian Rotating Chief of GECF

The Qatari energy minister, who was speaking at GECF's extraordinary ministerial meeting in Bolivia, said he hoped that Russian Deputy Energy Minister Yuri Sentyurin would take the forum of the world's top gas producers to "further heights of successes."

Speaking during a panel session at the GECF in the Bolivian city of Santa Cruz, the Gazprom senior official said Bolivian gas "should form a basis for the integration of gas value chains in the neighboring countries."

"Today we are going to sign a few documents with our Bolivian partners in order to also expand our presence here not only in Bolivia, but showing interest in terms of supply to some areas which are quite close to gas production," Andrey Fick, head of Gazprom International, the firm's overseas branch, said Wednesday.

Russia to create its own LNG production technology by 2020-2022 #SPIEF https://t.co/45xPmroxzV pic.twitter.com/qOPCXKdaQL

The energy giant and Bolivian authorities agreed in October to establish a joint venture to sell Bolivian gas in Argentina and Brazil.

GECF energy ministers have been holding a session in Bolivia since Tuesday. The energy forum, comprising Algeria, Bolivia, Egypt, Equatorial Guinea, Iran, Libya, Nigeria, Qatar, Russia, Trinidad and Tobago, Venezuela and the United Arab Emirates, will wrap up on Friday.