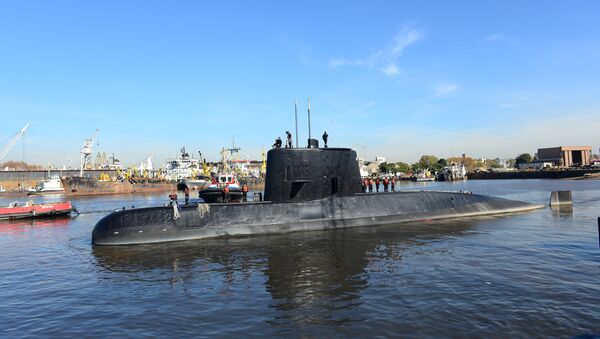 With hopes of finding the Argentine submarine that went missing in the South Atlantic a week ago beginning to fade, the families of the 44 crew members are increasingly frustrated with the Navy’s lagging rescue efforts, British media reported.

The Navy explains away the delay in the search for the missing sub by a formal 48-hour waiting period preceding the start of search efforts for submarines lost at sea, The Guardian wrote.

According to media reports, Defense Minister Oscar Aguad only learned from newspapers on Saturday that the Navy had lost contact with the 34-year-old San Juan boat, which was in the middle of a 10-day journey from the Argentinian port of Ushuaia to the naval base in Mar del Plata.

Argentina Detects 7 Satellite Calls From Missing Submarine
Argentine Navy spokesman said on Tuesday that the search for the missing sub had entered a critical phase because her crew's oxygen could run out by Wednesday.

If the sub doesn't surface, oxygen might last only seven days he said, adding that the San Juan was submerged when the Navy last made contact with it last week.

Shortly before that, the submarine’s captain reported it had experienced a "short circuit," and was told to change course and return to base.

Meanwhile, ships and aircraft from more than a dozen countries have been scouring the ocean for the missing sub on the surface and underwater.

Argentina has accepted help from Russia with President Mauricio Macri saying that President Vladimir Putin had phoned him with an offer to deploy a survey vessel and crew with experience in similar operations, the BBC reported.

The UK Ministry of Defense said on Wednesday that a RAF plane packed with tons of rescue equipment was on the way to Argentina and that a Royal Navy ice patrol ship had arrived on Sunday to the submarine’s last known location and was using its onboard sonar in the ongoing search for the San Juan.