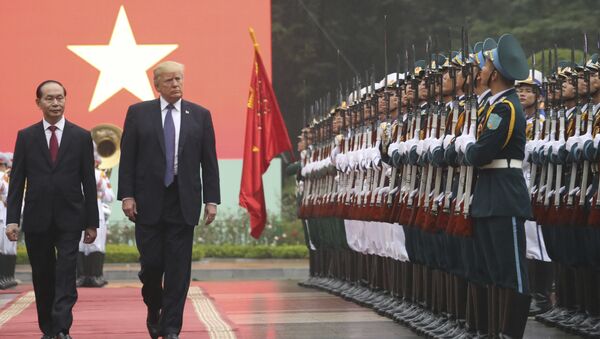 © AP Photo / Andrew Harnik
Subscribe
Three military personnel working for the White House Communications Agency have been reassigned from their jobs for allegedly having improper contact with women during US President Donald Trump's trip to Asia.

The White House Communications Agency comprises former service members who provide "vital information services and communications support to the president and his staff."

According to the Washington Post, the three men are also being investigated for allegedly breaking curfew during Trump's stop in Vietnam.

"We are aware of the incident," Mark Wright, spokesperson for the US Department of Defense told the outlet in a statement regarding the allegations. "It is currently under investigation."

If found guilty, the accused military men could either lose their security clearances or face a court martial, the Post reported.

The White House Communications Agency is no stranger to this sort of thing, either.

In August, four members from the agency were reassigned for reportedly bringing women back to their hotel rooms after curfew during Vice President Mike Pence's trip to Panama. The soldiers were removed from their stations upon returning to the US.

Army Col. Amanda I. Azubuike, a spokesperson for the US military, told the Post that the investigation into the Panama incident has been closed and has since been sent to senior military officials for review. There is no word on whether the officials have ordered any disciplinary actions.