JFK: The Assassination That Shook the World and Continues to Evoke Fierce Debate 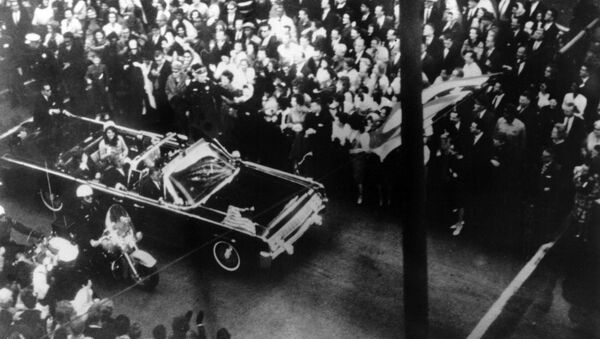 On November 22, 1963, President John F. Kennedy was shot dead in Dallas, Texas. 54 years on, the official government investigation's conclusion that Kennedy was killed by a lone gunman remains widely disputed, and debate about his possible real killers continues.

According to a recent survey of US public opinion about Kennedy's assassination, only 33% of Americans believe that Lee Harvey Oswald carried sole responsibility, as claimed by the Warren Commission, the official US government commission charged with investigating the killing. One particularly popular alternative theory regarding the political murder is that Kennedy was killed by the CIA or other elements of the US deep state.

Last month, President Donald Trump ordered the release of most of the remaining government files on the Kennedy assassination, promising "full disclosure" and the release of all the files, excepting names and personal details of persons who are still living. The fifth batch of files, released in accordance with the 1992 John F. Kennedy Assassination Records Act of 1992, was made public last week. In addition to new information on the assassination itself, the files shed new light on machinations by US intelligence in the early 1960s, including efforts to assassinate Cuban leader Fidel Castro, and plans carry out false flag attacks using Soviet-made planes.

Ex-KGB Agent Learned About Lee Harvey Oswald's Case Only After JFK Assassination
President Kennedy's legacy as president has been overshadowed by the 'what ifs' of history. Domestically, he is heralded for his support for minority and women's rights, and his efforts in the areas of environmental protection, housing, education and welfare.

At the same time, his attempts to eradicate poverty in America or institute universal healthcare proved far less successful, and the 'guns and butter' policy of major spending for public welfare programs and the military are believed by many to have contributed to the economic malaise that the US faced in the 1970s.

In foreign policy, Kennedy served amid a worsening of the Cold War with the Soviet Union, expanding the US role in Vietnam and presiding over a series of botched US efforts to overthrow the Cuban government, eventually leading to the Cuban Missile Crisis. Some observers, most famously American film director Oliver Stone, have argued that Kennedy planned to end the Cold War, citing the Partial Nuclear Test Ban Treaty and his diplomatic work with Moscow after the Cuban crisis brought the world to the brink of World War 3. 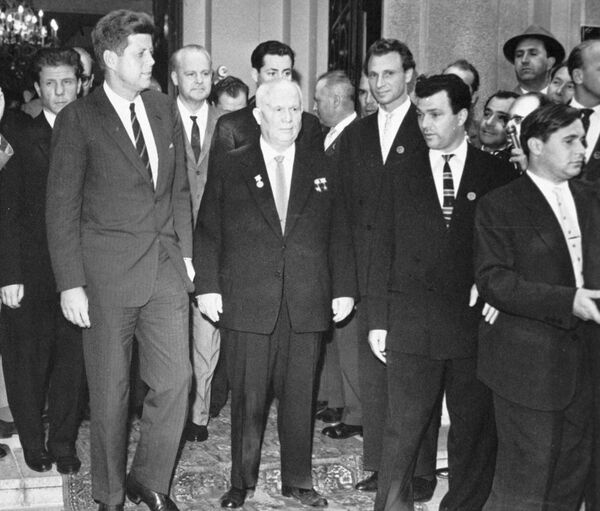 Nikita Khrushchev, first secretary of the CPSU Central Committee and Prime Minister of the USSR, and the U.S. President John Kennedy at the Soviet embassy in Vienna. (File)
© Sputnik
/
Go to the photo bank

Kennedy's proposals for military spending cuts and the closure of dozens of US military installations and bases worldwide, and to cooperate with the USSR in the space race are seen as more evidence of his goals, although the claim that he planned to pull the US out of Vietnam has been hotly debated given his policy of escalation in Southeast Asia as president. Overall, Kennedy's broad push for peace and peaceful coexistence with the Soviets is widely seen as one of the main motives for a government conspiracy to have him assassinated.