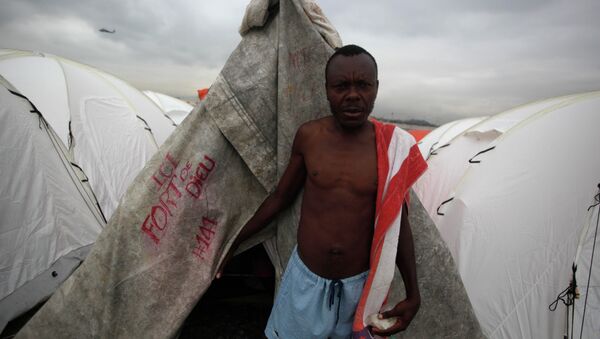 The Trump Administration has announced that it would not renew the Temporary Protected Status (TPS) for more than 50,000 Haitians with provisional legal residency in the US due to noticeable progress made since the 2010 quake in Haiti.

WASHINGTON (Sputnik) — Earlier, the US Department of Homeland Security (DHS) explained the decision to make changes to the immigration policy with respect to Haiti has been made upon thorough review of the current conditions in the country. US experts found that "extraordinary but temporary conditions caused by the 2010 earthquake no longer exist."

"Acting Secretary of Homeland Security Elaine Duke announced her decision to terminate the Temporary Protected Status designation for Haiti with a delayed effective date of 18 months to allow for an orderly transition before the designation terminates on July 22, 2019," the DHS release said on Monday.

US Extends Temporary Protected Status for Haitian Refugees by Six Months
In May, the Homeland Security has decided to provide a six-month extension to Haitian refugees, which came into effect on July 23, 2017.

According to DHS, as the recovery from the devastating 2010 earthquake continues, nearly 98 percent of camps for displaced persons in Haiti have closed,.

Meantime, Haitian authorities, and number of renowned US lawmakers, have asked the US officials to allow for Haitians to stay, citing the ongoing political and economic turmoil in one of the poorest countries of the Western Hemisphere,.

According to the US media outlets, most of the people with TPS status arrived in the US illegaly. They have avoided the deportation under a 1990 US law that allows immigrants to legally remain if the instability exist in their countries as the result of natural disasters or armed conflicts.