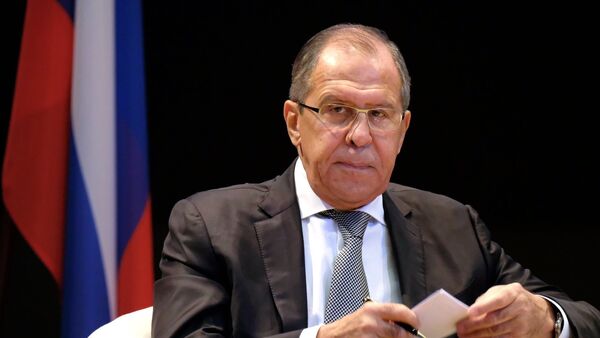 © Sputnik / Maxim Blinov
/
Go to the photo bank
Subscribe
The Russian Foreign Minister commented on the situation with the settlement of the conflict in Syria, including the resignation of the Riyadh Hijab, coordinator of the Syrian opposition's High Negotiations Committee (HNC), the role of Saudi Arabia in the settlement of the conflict and the interaction of Moscow and Washington in the region.

Russian Foreign Minister Sergei Lavrov praised the resignation of Riyadh Hijab, who has been the face of the Saudi-backed High Negotiations Committee (HNC) since December 2015. The resignation took place two days before the preparatory meeting in Riyadh ahead of the opposition conference on November 22.

"Those who follow the process of uniting the opposition, what our colleagues from Saudi Arabia are doing, assumed such a move," Lavrov said. "Riyadh Hijab and I worked together when he left Syria as prime minister and led the opposition forces. He dragged the opposition group in the wrong direction: not in the direction of implementing UN Security Council Resolution 2254, which has already become the Bible of the Syrian settlement, but towards ultimatums."

"We will support the efforts that Saudi Arabia is taking in this direction," the Russian Foreign Minister added.

Lavrov also commented on Moscow — Washington cooperation, saying they have organized stable cooperation on Syria, except on the issue of condemning the actions of terrorists.

Russia has participated in various diplomatic engagements with Turkey and Iran in Astana to resolve the Syrian crisis. The countries participants are conducting negotiations in the Astana format pave the way for a political settlement in Syria.

During the Astana talks Russia, Turkey and Iran with help of Jordan and the United States tried to coordinate a whole range of specifics of the the creation of 4 de-escalation zones in Syria. Russia's takes active role in recent Astana-format peace talks.

Intra-Syrian talks in Geneva are peace negotiations between the Syrian government and the Syrian opposition under the patronages of the United Nations.