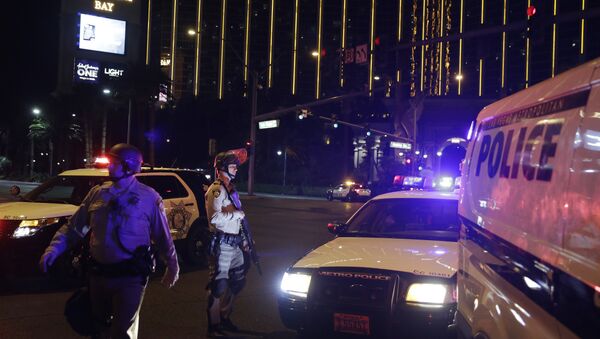 © AP Photo / John Locher
Subscribe
Hundreds of victims of the Las Vegas shooting filed lawsuits on Monday in a California court against the hotel where gunman Stephen Paddock carried out his attack, the organizers of the country music festival and Paddock’s estimated $5 million estate.

This suit is the largest one filed since the attack took place on October 1. It was filed with two wrongful death cases and two cases for victims who were critically injured in the shooting, which left 58 dead and more than 500 injured.

The lawsuits question the security procedures at Mandalay Bay Resort, where Paddock used a service elevator to smuggle an arsenal of guns into his hotel room. He reportedly planned his attack by posting a "do not disturb" sign on his hotel door for days, placing cameras outside his room to keep an eye on police, breaking two windows from his 32nd-floor room and blocking a door near an emergency staircase to slow down first responders, all while not raising any suspicions from hotel staffers and security personnel.

The lawsuits claim that the hotel "contributed" to the events before the attack through improper surveillance and was "grossly negligent in the selection, hiring and training" of employees in emergency situations. Further, the suits states that the hotel took too long to take action after the first shots were fired and argues that the event organizer, Live Nation Entertainment Inc., failed "to design, build, provide and mark adequate exits in case of emergency" and to "properly train and supervise employees in an appropriate plan of action in case of a foreseeable event, such as a terrorist attack or other emergency."

Survivors of the attack have described the concert grounds as a maze that was difficult to get out of during the shooting.

Paddock didn't leave a will behind before shooting at innocent concertgoers. Attorneys for the victims of the shooting are requesting that a third-party attorney control and freeze Paddock's $5 million dollar estate for now.

Authorities are still trying to determine Paddock's motive for the massacre. So far, all that investigators have gathered is that he was a depressed avid gambler and had lost a lot of money prior to the attack.

000000
Popular comments
Yes because that will 'cure what ails ya' and surely the hotel & concert planners no doubt felt it was a perfect time and venue for a massacre.